But not everyone is…

As we detailed earlier, despite feuds and furore, the House has adopted the final version of the 2018 budget.

As Bloomberg reports, House Republicans narrowly adopted a budget resolution Thursday unlocking a fast-track process to achieve their long-sought goal of cutting Americans’ taxes by the end of the year.

Adopting the budget resolution, which has already cleared the Senate, will put the House Ways and Means Committee on track to release the long-awaited tax bill as early as Nov. 1. Simply passing the Senate version of the resolution, rather than going to conference and hammering out the differences, will also save weeks on the legislative calendar and keep alive hopes of passing tax reform in 2017. Republicans were broadly supportive of moving quickly to get to the tax package.

“Our members know what this means in terms of getting the process started, working with President Trump to provide middle-class tax relief,” House Majority Whip Steve Scalise, the man responsible for rounding up votes to pass the budget, said on Fox Business just before the vote.

The 216-212 vote (20 Republicans voted against the budget plan) allows Congress to enact tax cuts later that increase the federal deficit by up to $1.5 trillion over 10 years. The bill could pass the Senate with just 50 votes — plus a tie-breaker from Vice President Mike Pence– bypassing the need for any Democratic support. 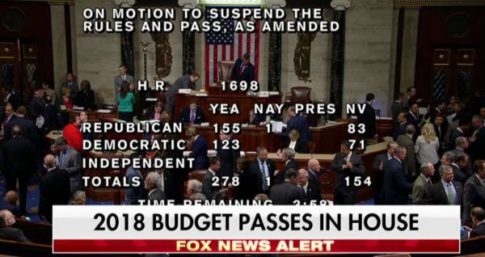 As The Hill reports, some conservatives still joined with centrists wary of the fate of the SALT deductions out of concern for the budget’s impact on the deficit.

“Passing a budget that doesn’t address out-of-control spending and adds trillions of dollars to the national debt just to achieve some policy goal — which also could be accomplished with a responsible budget — is an endorsement of a warped worldview where the end justifies the means,” the libertarian-minded House Liberty Caucus said in a statement urging members to vote against the budget.

Democrats excoriated the budget for outlining plans that would cut programs such as Medicare and Medicaid in an effort to balance the budget over a decade.

“There’s a lot of unjustifiable provisions in this budget. On top of massive tax cuts for the rich, it cuts vital national investments, threatening our economic progress and our national security,” said House Budget Ranking Member John Yarmuth (D-Ky.), citing over $4 trillion in mandatory spending cuts and almost $2 trillion in cuts from Medicare and Medicaid.

“The enormity of these cuts and the severity of the consequences for American families cannot be overstated,” he added.

Finally, as a reminder, the government is running on a three-month spending extension of 2017 spending, which will expire on December 8th.

Republicans and Democrats are gearing up for intense negotiations over a final spending package. Without a deal or another extension, the government will shut down. Even an additional stopgap measure will only be able to take the government into late January when strict budget caps will kick in and curtail spending across the board.