And what if all those battle field technologies will be used domestically (as planned by TPTB).

Who will then be able to resist the New World Order???

“It is the system of nationalist individualism that has to go….We are living in the end of the sovereign states….In the great struggle to evoke a Westernized World Socialism, contemporary governments may vanish….Countless people…will hate the new world order….and will die protesting against it.” 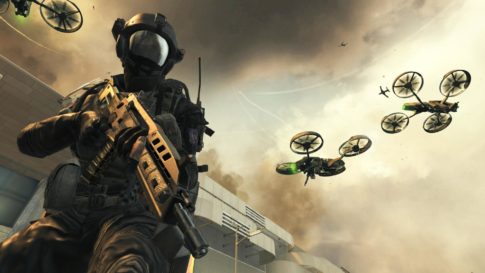 DARPA asked robot-developers for a way to let small infantry units deploy swarms of 250 or more robots in urban areas.

In the near future, US Army and Marine Corps infantry squads could march into battle behind swarms of hundreds of flying and crawling drones.

At least, that’s the plan. On October 12, the Defense Advanced Research Projects Agency—the Pentagon’s fringe-science wing—asked robot-developers to submit ideas for tactics and technologies that could allow small infantry units to deploy swarms of 250 or more robots.

The swarms must function “in built-up areas up to eight city blocks in size over mission durations of up to six hours,” according to Dr. Timothy Chung, the program manager.

“Unmanned air vehicles and unmanned ground vehicles have long proven beneficial in such difficult urban environs,” the agency added. “But their value to ground troops could be vastly amplified if troops could control scores or even hundreds—’swarms’—of these robotic units at the same time.”

The major obstacle isn’t the drones themselves. Wheeled and tracked ground robots and quadcopters are “increasingly capable and affordable,” DARPA stated. But the US military lacks the technologies to manage drone swarms. The Marine Corps began issuing quadcopters to infantry squads in September, but the squads operate the quadcopters individually.

OFFSET aims to solve the swarm-control problem by pairing small drone-developers with big defense firms including Raytheon and Northrop Grumman. Researchers at Georgia Institute of Technology might have a head start. They recently discovered a method of deploying large numbers of quadcopters in the same airspace without them colliding.

The Navy and Air Force are also trying to solve the same problem—albeit at high altitudes, where there’s more space and fewer obstacles. Working under the auspices of the Pentagon’s secretive Strategic Capabilities Office, the branches have tested swarms of up to 103 Perdix drones. The soda-can-size Perdixes eject from high-flying fighter jets and communicate with each other to maintain formation.

Managing drone swarms closer to the ground—and in a city, no less—is more difficult. For OFFSET, DARPA wants to develop an “advanced human-swarm interface” that combines voice and touch commands with a menu of deployment options that should mimic the playbooks of soccer and basketball coaches.

Chung wants teams of developers to work in six-month stints. In the first six months, the developers would produce “a generation of swarm tactics for a mixed swarm of 50 air and ground robots to isolate an urban objective within an area of two square city blocks over a mission duration of 15 to 30 minutes.”

Future development periods will pursue increasingly more ambitious goals, until infantry squads can intuitively deploy at least 250 robots at a time for a wide range of missions.

“We’re interested in developing practical swarm systems in an agile way, so future operators will have the tools they need to outsmart and outperform urban adversaries,” Chung said.

“This is going to lead to American military sitting in trailers, remote controlling drones and crawlers, all lethal, in neighborhoods where basically everyone gets killed.

If you ever wanted to see a future where milennials can handle battle, this is it, and if this is implemented properly it will eventually lead to stay at home warriors, who kill from the couch while viewing the battle from a 4k screen.

This tech will lead to a war scenario where a single military cargo jet can simply fly over an area that is slated for annihilation, drop 10,000 lethal drones, that then hook up with their controllers for a day of killing, and return to a central controlled location to be recharged and ready to go the next day. A perfect coward’s war. Yes, a snowflake could handle that.

In the case of a crawler, at the end of the day the main module could simply detach from cheap wheels or tracks it was coupled to, deploy propellers, and fly off, leaving the wheels, which are worthless, behind.

The drones could go everywhere, peeking in windows and shooting people while they eat at the table, all at no risk to the operator. This could easily be deployed in the U.S. also, to take out dissidents as they post stuff to the internet the shadow state does not like. No trace of what happened left behind.“