Something is seriously amiss with the recent California fires

UPDATE: Many people have messaged me saying this happened on 911 also. I was skeptical, until now. If the engines and rims were melted on 911, it was obviously the same thing happening.

Some people have seen this type of report elsewhere already. However, I have discovered something new, and also proven the melted cars are unique to the recent fires.

It was not just this year. The same anomalies happened in 2015

What anomalies? Let me show you something.

Lets start with a couple examples of cars NOT burned in California wild fires, to show that what is happening in California is very strange.

This is a Jaguar that was NOT burned in the California fires. Look at the rims. Look at the ground around it. No melted metal. Even though the tires burned completely off the alloy rim, the rim is still there. The white stuff on the ground is the fire foam used to put it out. 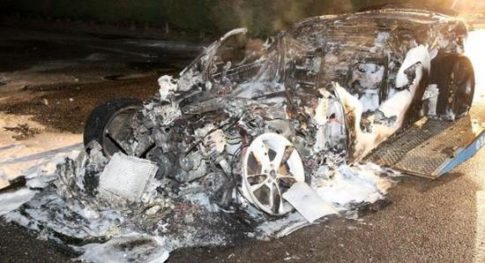 Ok, so a Jaguar might have special alloy rims that won’t melt in a fire, right? Well, what about this Ford truck then, that got completely consumed, including tires burned perfectly off the rims. Rims are fine. The engine is not melted. This truck burned so badly the body vanished and it looks like someone stripped it, yet the rims and engine are still there. 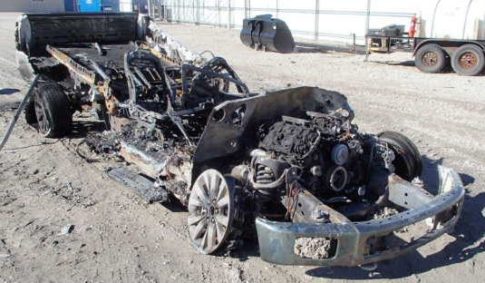 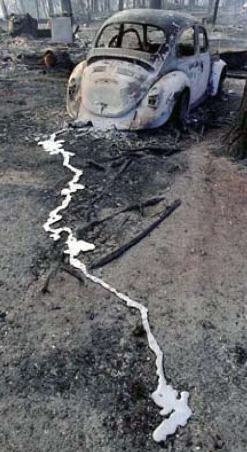 The rims did not vanish. Not on the truck, not on the jaguar. The bodies on both of these vehicles vanished because they are aluminum. That would be explainable, because body metal is thin enough to vanish. I chose the first two pictures because they are the most extreme examples of burned cars I could find, with sections of the bodies gone, yet the aluminum engines and aluminum rims are still there. Why did they not melt, flowing out onto the ground? Not being in a California wild fire is not an acceptable explanation for the engines and rims staying intact. If they are intact in these two extreme cases, there is no way they should be melted all over the place in California.

Ok so here’s a burned slug bug after a california wild fire. The engine melted. It is flowing down the road. What on earth is in a slug bug that could cause it to burn like that?.

Important on this next photo – this is from a 2015 California wild fire.

The rims melted on this car (below), and there is absolutely nothing around it to indicate it should have burned so hot. You can search Google images all you want for burned cars, and aside from those that burned in California wild fires in recent years, you won’t find examples of the metal flowing away from them like this. And what’s worse? This car is isolated. There was not enough around it burned to cause it to melt like this. Look at the pavement, even away from the car. It is simply too scorched to believe a burning car did that. Yet it is not burned far away from the car, which proves heat from a fire on the other side of the road did not do this. Yet this photo is confirmed to have come from a California wild fire. INEXPLICABLE! 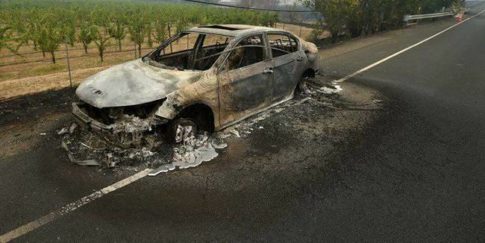 It is obvious some sort of energy weapon did this.

How about this next photo. This is very odd. Here we have an obviously totally melted engine. If the engine in the Ford truck above did not melt (and it was aluminum, just like the SUV in this photo,) I’d like an explanation for how a car that burned a lot less had this much melted metal flowing out of it. And this is not an odd example, there were countless cars just like this one in the California wild fires this time around. What on earth was in the slug bug (above) that would cause it to burn so bad the engine flowed away? That is not a car loaded with plastic and other combustibles. Burning the fuel tank would likely not do it either. I have never seen an engine flow away just because a gas tank caught fire – I have never seen that happen PERIOD. So WHY THIS? 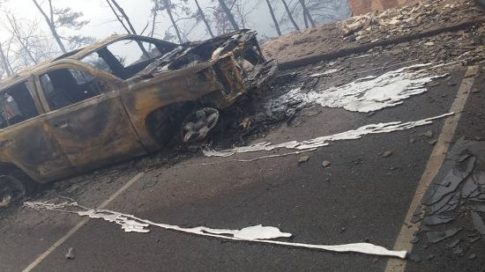 It was not just the car anomalies that is making the California fires extremely anomalous. This next photo is explainable. This is what happens when in America, people are only allowed to build with wood, and then a wild fire comes through. The big problem with this photo is the fact the houses burned at all, simply because the rules said they had to be built with materials that burn. That would be a tyranny problem. 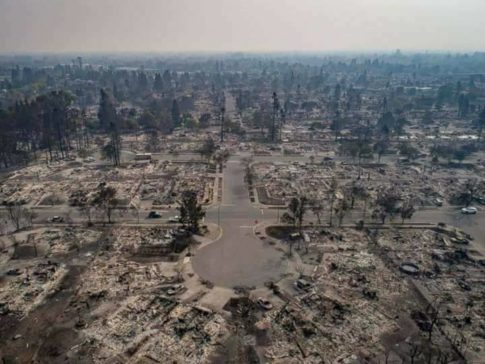 But this next photo needs some explaining. Here we have totally isolated structures, with nothing burned in sight, yet they just decided to pop themselves off. There are lots of photos of burned homes right in with perfectly intact trees, (which looks suspicious but could be tenuously explainable) but this here takes the cake, I don’t buy this, this beyond all doubt had to have been done as an act of war, with a directed energy weapon. And I would bet that is why we have inexplicably melted cars also. 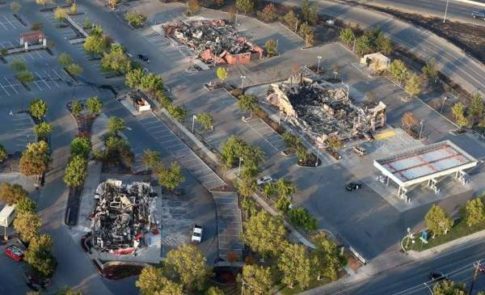 I at first figured that when cars with alloy rims burned that it was normal for them to melt and flow away from them. But when you search Google images, the only examples of this happening are all from California, and associated with these wild fires. I beg to question why. Perhaps here is a hint, from someone who lived through one of these fires in 2015:

“It wasnâ€™t even a fire. It was like fluorescent evil,” Whispering Pines resident Bill Gavin told the Press Democrat. “I saw sections like football fields go up in four seconds.”

Readers of this web site sent messages, saying the air was electrified, to the point of being visible and affecting their heart beat. This was covered in an earlier report. So at that time, it was basically proven that directed energy weapons were used for the recent fires. But I did not believe it melted the cars until now. Search Google images for an example that comes from a source other than these fires. There are none that I found, and an endless stream of examples from california, and these fires. The cars really are a unique feature of these fires that prove something is seriously amiss with how these fires are actually starting. 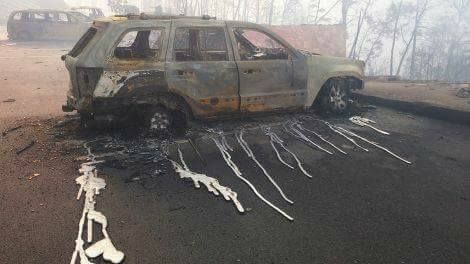 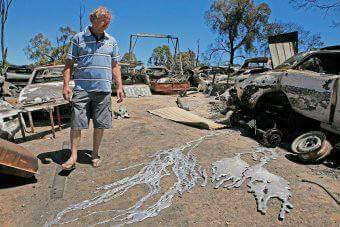 It seems to me that someone used wild fires as cover for a weapons test.