Much like Hillary’s former IT consultant Paul Combetta who admitted to deleting Hillary’s emails despite the existence of a Congressional subpoena, it seems as though James Comey has just had his very own “oh shit” moment.

After months of inexplicable delays, the chairman of the House Judiciary and Oversight committees,  Bob Goodlatte (R-Va.) and Trey Gowdy (R-S.C.), announced moments ago a joint investigation into how the Justice Department handled last year’s investigation into Hillary Clinton’s private email server.

Among other things, Goodlatte and Gowdy said that the FBI must answer for why it chose to provide public updates in the Clinton investigation but not in the Trump investigation and why the FBI decided to “appropriate full decision making in respect to charging or not charging Secretary Clinton,” a power typically left to the DOJ.

“Our justice system is represented by a blind-folded woman holding a set of scales. Those scales do not tip to the right or the left; they do not recognize wealth, power, or social status. The impartiality of our justice system is the bedrock of our republic and our fellow citizens must have confidence in its objectivity, independence, and evenhandedness. The law is the most equalizing force in this country. No entity or individual is exempt from oversight.

“Decisions made by the Department of Justice in 2016 have led to a host of outstanding questions that must be answered. These include, but are not limited to:

‘The Committees will review these decisions and others to better understand the reasoning behind how certain conclusions were drawn. Congress has a constitutional duty to preserve the integrity of our justice system by ensuring transparency and accountability of actions taken.”

????#BREAKING: @RepGoodlatte & @TGowdySC to investigate #DOJ decisions made in 2016 to ensure transparency and accountability at the agency. pic.twitter.com/EOm4pnHbTG

Of course, this comes just one day after Comey revealed his secret Twitter account which led the internet to wildly speculate that he may be running for a political office…which, these days, being under investigation by multiple Congressional committees might just mean he has a good shot.

Finally, we leave you with one artist’s depiction of how the Comey ‘investigation’ of Hillary’s email scandal played out… 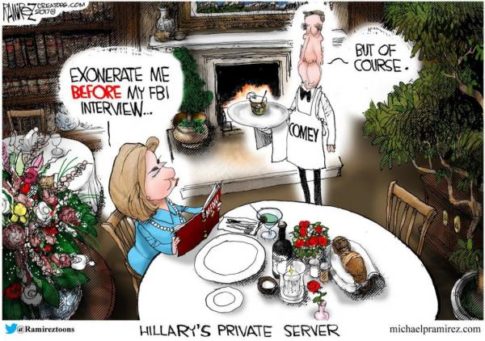 Here is the full letter from Goodlatte and Gowdy: