– Irma’s 15-Foot Storm Surge Could Demolish 1,000 Miles Of Florida Coast: “It Will Cover Your House”:

As we noted on Friday, sea-level analytics firm Climate Central had created a simulation based on the National Hurricane Center’s Coastal Emergency Risks Assessment storm surge and wave modeling that illustrated the devastating flooding in Miami that could result from Hurricane Irma’s storm surge. By overlaying the NHC data with a three-dimensional visual of the city obtained using Google maps, the firm created a realistic visual of what the city would look like under between seven and 11 feet of water.

Luckily, in the last minute the Hurricane shifted westward, but the concerns remain.

Given the expected intensity of the flooding, some readers might assume that the dreaded surge would be the result of tsunami-like waves overwhelming the city’s beaches. But that’s not the case. As the Associated Press explains, the hurricane-force winds draw in water not just form the ocean, but other nearby bodies of water as well. However, forecasters say surges kill more people than the strong winds.

As Florida Gov. Rick Scott warned, the surge “will cover your house.” Already, at least three Floridians have died in the Keys.

“It’s not a wall of water or a tsunami. Simply put, hurricane winds push water toward shore. It can happen quickly and far from a storm’s center, inundating areas that don’t typically flood.

Storm surge doesn’t just come from the ocean. It can come from sounds, bays and lakes, sometimes well inland.”

And with a category four Hurricane like Irma, the water can rise quickly, creating a potentially lethal surprise.

“Large hurricanes tend to create greater storm surge over a broader area, and coastal features such as bays can act like funnels and back water up into rivers and canals, said Jamie Rhome, head of the U.S. National Hurricane Center’s storm surge unit.

‘This is going to sneak up on people,’ Rhome said.”

But while the surge levels in Miami could be potentially life threatening, the threat to the Florida Keys, where Irma this morning made landfall at Cudjoe Key, is even more severe.

The National Hurricane Center forecasts water levels up to 15 feet (4 meters) above ground for the chain of islands and parts of the Gulf Coast, which are also expected to receive up to 25 inches of rain. And according to the Associated Press, the flooding threat could extend far beyond the path of Irma’s eye. The Atlantic coast from Miami to Isle of Palms, South Carolina, could see up to 6 feet (2 meters) of storm surge. 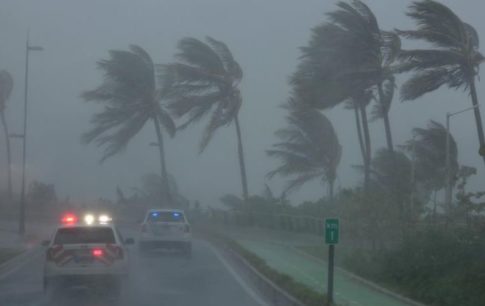 Irma’s surge could ultimately flood 1,000 miles (1,600 kilometers) of coastline from Tampa Bay to the mid-South Carolina coast. Much of that land is less than 10 feet (3 meters) above sea level.

Much of Florida’s southwest coast is uninhabited swampland, including a large section of Everglades National Park, but scientists warned the Everglades wouldn’t stop the flooding of affluent communities nearby, including Naples, the home of Florida Gov. Rick Scott. Forecasters say the surge will kill more people than the strong winds. Scott said it “will cover your house.”

In fact, some forecasters believe the storm will leave Naples underwater.

‘Look at Naples, the entire town of Naples is underwater,’ Klotzbach said. ‘That is horrible. God that looks awful.’”

North of Naples is the Tampa Bay area, which is also at risk of extensive flooding related to the surge. About 3 million people live in the area, which has a Busch Gardens theme park and baseball spring training grounds for the Philadelphia Phillies and Toronto Blue Jays.

Already, the tide in Tampa Bay is going out, setting up the shoreline for a massive surge as Irma approaches.

#Tampa Bay is being pushed out right now, as soon as those winds change that water is going to surge back in! #Irma pic.twitter.com/k7piE301mX

Over the past fifty years, storm surges have accounted for about half of the deaths from hurricanes, tropical storms and cyclones in the US over the last half-century, according to a hurricane center study.

During the 1935 Labor Day Hurricane, the surge helped destroy nearly half the structures along a 40-mile (64 kilometer) stretch of the Florida Keys, killing more than 400 people, including World War I veterans working on a railway project. During Hurricane Katrina, storm surge flooding of up to 28 feet above normal tide directly or indirectly causing at least 1,500 deaths. Hurricane Sandy, which was technically classified as a post-tropical cyclone when it made landfall in New Jersey in 2012, was still large enough to drive catastrophic storm-surge related flooding along the New Jersey and New York coastlines.

With Irma having made landfall in the Keys just hours ago – though the first hurricane force squalls were felt late last night as the storm approached – Bloomberg is reporting that Florida Power & Light Company said that nearly 1.1 million customers statewide were without power Sunday morning, according to Bloomberg.  About 574,000 of those outages were in Miami-Dade County, while there were 360,000 in Broward and nearly 136,000 in Palm Beach County. The effects are being felt far from the center of the storm, due to its size. 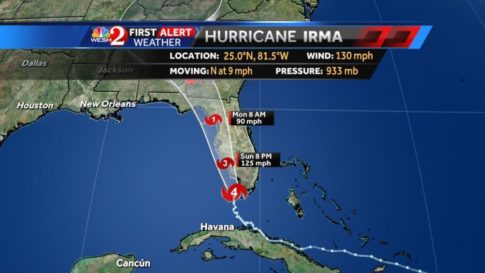 Just before Irma’s landfall, Enki Research disaster modeler Chuck Watson said the storm’s trek up Florida’s coast could cost $192 billion and threatens $2 trillion of property. Total losses from Katrina reached $160 billion in 2017 dollars. Irma is “easily on track to be the new No. 1 storm unless intensity collapses,” Watson said. President Donald Trump said Irma is “a storm of enormous destructive power” while discussing preparations with his Cabinet.