– Florida Stores Running Out Of Water, Gas As Gov Warns “Make Sure Your Disaster Kits Are Ready” For Irma:

Hurricane Irma is hurtling toward the eastern US faster than meteorological models anticipated. According to the latest readings from NOAA, the storm will probably make landfall in Southeastern Florida next weekend, or perhaps earlier – that is, unless wind patterns intervene and spare residents of Miami, Ft. Lauderdale and West Palm Beach from flooding and winds witnessed in Texas and Louisiana, according to NOAA forecasts.

…Bloomberg chief energy correspondent Javier Blas noted that the Hurricane has “shifted a lot further west,” and that, according to the latest forecasts, there’s still a small chance that Irma strikes the Gulf of Mexico, compounding the devastation that Harvey left behind.

#Irma forecast has shifted a lot further to the west — with some weather models suggesting a small chance (as today) of US GoM hit #OOTT pic.twitter.com/7ekw6gxEVW

Here’s what we know about Irma (courtesy of the Weather.com & NOAA): 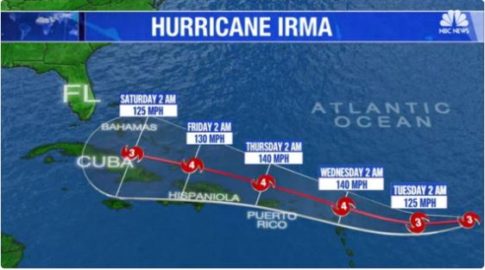 NOAA satellites captured this stunning video of the sun rising over the hurricane on Monday:

Hurricane watches have been issued for the Leeward Islands, including Antigua, Barbuda, Anguilla, Montserrat, St. Kitts, Nevis, Saba, St. Eustatius, Sint Maarten, St. Martin and St. Barthelemy. According to Weather.com’s latest long-term forecast, by next weekend, Irma will be immediately southeast of the US. 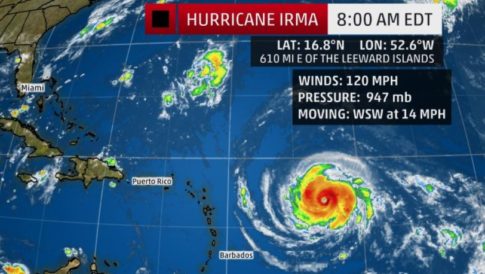 At that point, jet stream dynamics will begin to turn it north. What happens after that will be critical in determining where – or whether – Irma lands in the US.   Meanwhile, residents of southeast Florida – having spent the last week reading about the flooding in Houston – are understandably starting to panic. 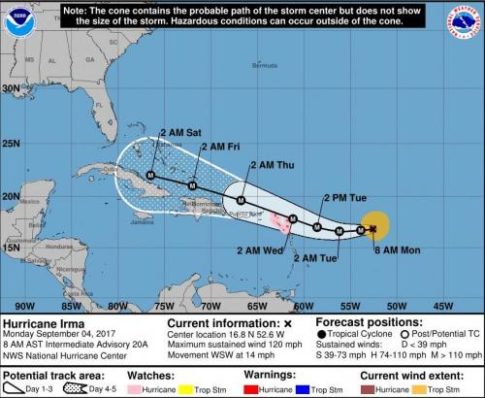 WPTV in West Palm Beach reports that Shelves of water at several stores were nearly empty Sunday, even as Irma’s path remains uncertain. Hardware stores are also running out of tanks of gas and other supplies.

One distressed shopper told WPTV that one Walmart had run out of bottled water.

“There was nothing at Walmart,” said Bianca Rodriguez of Palm Beach Gardens. “Not even like one thing of water.”

According to WPTV, emergency officials recommend people have one gallon of water per person, per day for at least five days in the event of a hurricane. Florida Gov. Rick Scott warned that “disaster preparedness” should be a priority for every family in the potential path of the storm.

One shopper said he bought the last remaining cases of bottled water at the Winn-Dixie in Palm Beach Gardens.

‘I lucked out. There’s only a couple left, but at least there was enough for me,’ said Rodriguez.”

A Home Depot in Royal Palm Beach on Monday morning posted a sign that said they were short of some hurricane supplies.

As we continue to monitor Hurricane Irma, families should make sure their Disaster Supply Kits are ready today. https://t.co/ymXjrTHewW

Let’s hope they have time to restock before next weekend…