– Muslim preacher who called for destruction of Britain allowed to enter UK, set to address Parliament:

Britain has made its priorities clear: offending Muslims and Islam is far, far more serious than jihad terror or the sexual abuse of Infidel girls. To move strongly against such crimes would be “Islamophobic.” The British authorities have made their taste for jihad terrorists, and disdain for their foes, abundantly clear. While I am banned from the country for the crime of noting — correctly — that Islam has doctrines of warfare against unbelievers, Britain has a steadily lengthening record of admitting jihad preachers without a moment of hesitation. Syed Muzaffar Shah Qadri’s preaching of hatred and jihad violence was so hardline that he was banned from preaching in Pakistan, but the UK Home Office welcomed him into Britain.

The UK Home Office recently admitted Shaykh Hamza Sodagar into the country, despite the fact that he has said: “If there’s homosexual men, the punishment is one of five things. One – the easiest one maybe – chop their head off, that’s the easiest. Second – burn them to death. Third – throw ’em off a cliff. Fourth – tear down a wall on them so they die under that. Fifth – a combination of the above.”

May’s government also admitted two jihad preachers who had praised the murderer of a foe of Pakistan’s blasphemy laws. One of them was welcomed by the Archbishop of Canterbury.

Meanwhile, the UK banned three bishops from areas of Iraq and Syria where Christians are persecuted from entering the country. 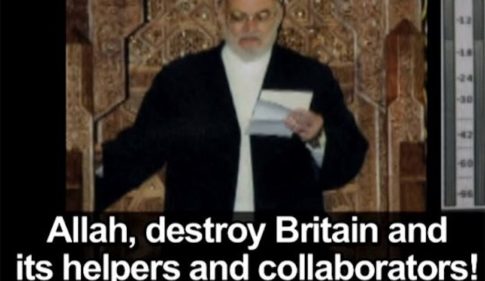 “Islamist Preacher Who Called for Destruction of Britain Coming to Parliament,” Guido Fawkes, September 1, 2017 (thanks to Philip):

Heads up Special Branch – a notorious Islamist hate preacher who called for Britain to be “destroyed” is due to meet MPs in parliament this month. Sheikh Ekrima Sabri, a former Grand Mufti of Jerusalem and current Imam of the city’s Al-Aqsa Mosque, will visit Britain as part of a delegation organised by pro-Palestinian group EuroPal. Provided he isn’t stopped at Heathrow…

An email sent to MPs announced the details of Sabri’s visit and offered meetings in parliament with the EuroPal delegation between Monday 11th and Friday 15th September. Cup of tea with Jezza?