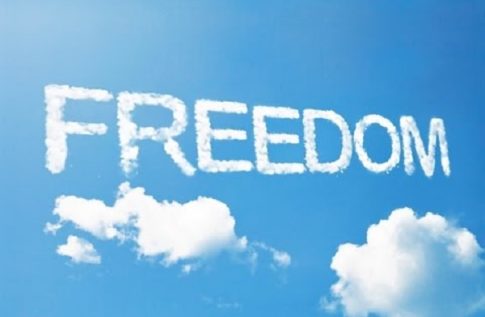 I believe in the American ideal, and that’s why I don’t live there.

Back in the late 18th century, the American colonies were made up largely of self-reliant people who had a strong work ethic. Most had either been born in the UK, or their parents or grandparents were born there. What set them apart from their fellow Britons was that they didn’t simply accept their lot in life back in the UK. They chose the more uncertain outcome of life in the colonies. They therefore had the courage, imagination, and desire to create their own destiny, traits that their fellow Britons did not possess.

Not surprising, then, that they carved out thirteen very productive and prosperous colonies, without the burden of a top-heavy, overreaching government. When the UK government sought to increase taxation and control (i.e., enslave) the colonists, there was rebellion. The tax being exacted by King George was miniscule by today’s standards, but that wasn’t the point. They fought against enslavement, and, in their talks of independence, they emphasized this point.

The American ideal, first and foremost, was freedom.

They weren’t seeking entitlements, or promises of government-generated jobs, or protection from the natives. They had already learned how to protect themselves, create their own jobs, and provide for themselves. They were prepared to be self-reliant as one of the prices of freedom.

When Thomas Jefferson wrote the Declaration of Independence, it was with the intention of creating a document upon which all the other delegates to the Constitutional Convention could agree as a basic set of understandings. In doing so, he not only unified the colonies; he also defined freedom for every generation of people that came after him, whether they were American or from any other country in the world.

After creating the US, there were, understandably, many upsets along the way. From the time of the very first cabinet, Jefferson, as Secretary of State, was at odds with Secretary of the Treasury Alexander Hamilton, who couldn’t wait to create a national currency, direct taxation, and a central bank. Over the ensuing decades, the tide of freedom ebbed and flowed as forces from within the US sought to diminish freedom, just as they do today. In my estimation, the US began its steady decline in earnest roughly one hundred years ago. Since that time, Americans have, increasingly, traded freedom for the promise of a safety that was never fulfilled, and for ever-increasing largesse from the government—largesse that they already paid for through taxation.

I’m British and, two generations ago, my grandparents set out for “the colonies.” Like the first Americans, they had an ideal in mind. They moved around a bit, but finally found that ideal during my generation. Today, I’m able to live a life that’s far freer than I would have if I were to move to the US and, truth be told, I’d be just as unwilling to move to the UK. I like it there, but it couldn’t be my home. At present, I possess the documentation to live in a total of thirty countries, but choose to live in only two of them.

If either country were to fall below the ideal I’ve set, I’d pack up my bags and not return. My philosophy is simple: When the apple is thoroughly rotten, it’s time to find a new apple, not live in the vain hope that somehow the apple will grow less rotten with time.

For many years, I’ve been advising people on internationalisation and, in recent years, the numbers of people I’ve seen have been dramatically on the increase. Many of them come from the US and, frequently, they confess that, although they’re considering leaving the US because it’s become unlivable for them, they feel somewhat guilty. They feel as though they’re turning their backs on America and the American ideal.

The American ideal is in fact a universal ideal. This is an important distinction to understand, because it serves as a reminder that loyalty and patriotism should not be applied to any particular piece of geography. Just as people left for America to find freedom in times gone by, it makes equal sense to move away for the very same reason. Americans, or anyone else who seeks freedom from oppressive governance, should recognize that the world is made up of some 200 countries, each offering a different combination of advantages and disadvantages. No one country is ideal for everyone, but the choices are many.

The good news is that, today, the American ideal is very much alive – it just doesn’t happen to live in the US. (Although there are those who retain this ideal and choose to “fight from within” to return the US to its founding ideal.) But the odds of achieving this are very poor indeed. The US, like many other countries in the former “free” world, is currently plunging headlong in a downward trend. A reversal is unlikely in the extreme.

In my own country, I receive no entitlements. I have to create my own wealth. But, I live under a minimum of laws, including no direct taxation of any kind. I make my own choices, I can speak freely, without fear of reprisal from political correctness. I’ve never been taken to court and I’ve never needed to take out a loan.

The universal ideal of freedom is very much alive and is yours to find, should you feel that your country has lost it and you want to live the rest of your life as a free individual.