– One Statistics Professor Was Just Banned By Google: Here Is His Story:

Statistics professor Salil Mehta, adjunct professor at Columbia and Georgetown who teaches probability and data science and whose work has appeared on this website on numerous prior occasions, was banned by Google on Friday.

What did Salil do to provoke Google? It is not entirely clear, however what is clear is that his repeated attempts at restoring his email, blog and other Google-linked accounts have so far been rejected with a blanket and uniform statement from the search giant.

Here is what happened, in Salil Mehta’s own words.

Don’t do a googol of evil

Freedom is not free unless corporations who exert a large influence in our lives believe in our well-being.  I am a statistics professor and understand that there needs to be reasonable standards to control a large social network and make sure everyone is able to enjoy it freely.  Invariably people disagree (we all see this), but some principles, such as simply showing probability and statistics with the sole hope of educating others, should be acceptable and in the middle of the distribution.  I am for a higher standard, and a higher purpose.  There is great care that I have taken to make sure that people treat one other well, admit faults, and present math and probability education to a wide audience.

On Friday afternoon East Coast Time by surprise, I was completely shut down in all my Google accounts (all of my gmail accounts, blog, all of my university pages that were on google sites, etc.) for no reason and no warning.  A number of us were stunned and unsure, but clearly we know at this point it wasn’t an accident.  Here are some examples commented from best-selling author Nassim Taleb, and they have been retweeted by government officials, and the NYT and WSJ journalists.

Even his email was disabled by Google. https://t.co/Zj9g9MpKzr

My ads-free blog itself is a probability theory site, with 27 million reads and has somewhere near 150k overall followers.  It’s been read by Warren Buffett, Elon Musk, Nobel Laureates, multiple governments, celebrity athletes around the world, deans of many universities (on the syllabi of same), and a number of TV news anchors.  So it’s been a great boon for Google to be noticed so kindly by essentially a charitable site promoting math education.  What great people from all corners of the world and at all levels who can enjoy Google, until it suddenly died Friday afternoon.

My background is clean, and without a political or social agenda.  I am not promoting any specific viewpoint.  I teach probability math and that’s it.  Have worked with both the Obama administration and advised on polling statistics for the Trump campaign, am an adjunct professor at three top universities, an editor of the peer-reviewed journal of the American Statistical Association, and wrote a best-selling statistics book (all the proceeds of which I gave to charity!) https://www.amazon.com/Statistics-Topics-Salil-Mehta/dp/1499273533

The NYT has a popular print article this weekend and they cited my Google blog, but alas it not links to an embarrassing malfunction, for many to see: https://www.nytimes.com/2017/08/19/business/the-stock-market-has-been-magical-it-cant-last.html

This doesn’t look good.  Now instead of mathematics, reporters have turned to this latest circus nightmare from Google as an example of how they are compounding bad decisions on good people anywhere and at any time.

Can they not differentiate me from an evil person?  Can they not see the large and reputable people and institutions that have relied on my work?  Do they have better people who can coach them on how to make decisions with much better taste and finesse?  What’s next, all CEOs and professors and politicians are going to be shut down from social media whenever it is least expected?  Overnight hi-tech lynching squads are a thing of the past.  We can’t have kangaroo courts and hope to lead with moral authority.

There is a lot of energy being spent right now thinking about how this happens to your best customers, just like that.  Fear is running wild about who is next and on what other social media platforms.  Have used Google for 11 years with no issue.  Have driven enormous free traffic to your products and properties.  But now that’s been severely damaged as the trust/reputational value has been crushed, and I have to re-emerge quickly elsewhere and deal with this fall-out.  I have many students, family, coworkers, etc who typically send me e-mails each day and all of it is vanishing with a kicked-back “user doesn’t exist” error.  And that’s totally unacceptable.  Through my many companies have business accounts on different social media and have no issue getting a marketing line, but one needs to know who they are dealing with and not treat them this badly.  The wrongs here are not being done by me.

Again, a math site.  An academic site that you can see from the various header tabs of the archives (http://web.archive.org/web/20170518181653/http://statisticalideas.blogspot.com/2012/11/statistical-ideas-website.html).  These are applications of formulas and shouldn’t be subject of limitations of free speech.  A lot of great people like it.  Hopefully Google needs to take huge step back and reexamine what went wrong and how the product could be better for others going forward, so that they and all of us grow well.  People’s faith in democracy is on the line.  Faith that technology companies are looking out for our good first.

I have followed their common “appeal” form but no response for three days.  Also connected with one of the VPs over the weekend and it still takes time until receiving this today!  Just more of a reflection of how cold a company can treat someone very poorly: without any information, and lack of ability to move forward in their life (can I get real reasons if any, can I get advance notice, can I get my contact list back from gmail, and why are university properties unrelated to my blog shut down?)

We are going to be looking back on this time in Google’s history and those of other social media and know that they have done some very immoral and confusing things, and it has hurt their public reputation with decent people who wanted to grow into the next future with them 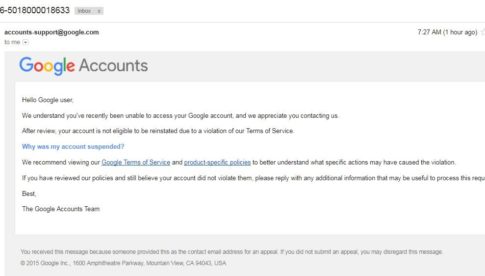 13 thoughts on “One Statistics Professor Was Just Banned By Google: Here Is His Story”