“The Trump presidency that we fought for, and won, is over,” Bannon said Friday, shortly after confirming his departure. “We still have a huge movement, and we will make something of this Trump presidency. But that presidency is over.”

Bannon was the “Make America Great Again” guy in the White House. The strategist who had the populist ideas that brought the votes for Trump. Jobs, jobs, jobs,  infrastructure investments, immigration limits, taxing globalists were his issue. 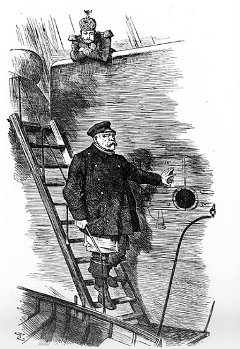 Trump is no young German Emperor and Bannon is no chancellor Bismark. (Both would probably have liked those roles.) But with Bannon leaving, the Trump presidency is losing its chief strategist, the one person which set priorities and could set an alternative course for the ship of state under Trump’s command. 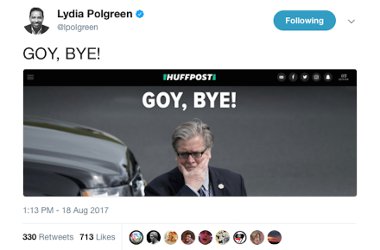 Haaretz notes that his ouster was hailed by U.S. Jewish groups.

The reason is not that Bannon is anti-semite or a Nazi – he is neither. (It was the Obama administration, not Trump, which voted against the UN anti-Nazi resolution.) Bannon was anti-Islamist and anti-Iran which fitted the Zionist program. But he was also against the waste of U.S. assets and capabilities for the welfare of other countries. He was anti-empire and anti-war. Only yesterday a NYT portrait of him noted:

General McMaster has become Mr. Bannon’s nemesis in the West Wing, the leader of what Mr. Bannon has described to colleagues as the “globalist empire project” — a bipartisan foreign policy consensus that emphasizes active American engagement around the world.Mr. Bannon flatly rejects that philosophy.
…
Once Mr. Trump was in office, Mr. Bannon opposed the missile strike on Syria after President Bashar al-Assad used chemical weapons on his own people. He has expressed doubts about sending more troops to Syria or Iraq. He is skeptical of American military intervention in strife-torn Venezuela, a prospect raised last week by Mr. Trump, who surprised administration officials by speaking of a “military option” there.

Bannon was also against the imperial projects in Afghanistan, North Korea and elsewhere. Then the empire stroke back at him.

The White House is now under command of military hawks and interventionists. A triumvirate of war-losing Generals, Kelly, Mattis and McMaster, is in control of U.S.  policy. That policy will likely be similar to the one we expected under a Hillary Clinton administration. The neocons, pushing for a dangerous crisis, are winning and the liberals are loving it.

It is not clear at all who will now set the overall political calendar for the Trump presidency. When will what policy initiative be launched? Will it collide with other initiatives? Who will coordinated this with Congress? What priorities must be given to this or that? The four star general Chief of Staff and the three National Security Advisor are neither trained nor capable to evaluate or take such political decisions. Who, after Bannon, is thinking about these issues?

Interestingly Bannon was one of the few untouched by the Russia investigations. Trump would not have been elected without him. He himself is now the only one in the White House who somewhat holds the policy views that got him the necessary votes. It is doubtful that he will be able to translate those into politics. He is (like Bannon) too inexperienced in handling the Washington ship of state to survive by himself. He is incompetent in selecting staff and disloyal to his subordinates. Only the fear of the religious craziness of Vice President Pence prevents, for now, his impeachment. Trump is not happy with his situation.

Bannon came in to drain the swamp but the swamp drowned him. He will now go back to Breitbart.com and will “go to war for Trump”. It is the website where he, as executive chairman, first promoted his right-wing nationalist views. Bannon will surely continue to make waves. But I doubt that it will be able to help Trump to implement what Bannon and Trump himself intended to do. As a well known public person once observed:

Donald J. Trump @realDonaldTrumpIt’s almost like the United States has no President – we are a rudderless ship heading for a major disaster. Good luck everyone!

“Seems to be getting all the ducks in a row.”