Update: Reuters adds that Grand Jury subpoenas have been issued in connection with the June 2016 meeting between Donald Trump Jr., Russian Lawyer and others.

Stocks slumped, and VIX spiked following news that Special Counsel Robert Mueller has impaneled a grand jury in Washington to investigate Russia’s interference in the 2016 elections, the WSJ reports, adding that “this is a sign that his inquiry is growing in intensity and entering a new phase.” The grand jury is said to have begun work in recent weeks, suggesting Mueller’s inquiry is ramping up and “that it will likely continue for months.”

Some details: “grand juries are powerful investigative tools that allow prosecutors to subpoena documents, put witnesses under oath and seek indictments, if there is evidence of a crime. Legal experts said that the decision by Mr. Mueller to impanel a grand jury suggests he believes he will need to subpoena records and take testimony from witnesses.”

“This is yet a further sign that there is a long-term, large-scale series of prosecutions being contemplated and being pursued by the special counsel,” said Stephen I. Vladeck, a law professor at the University of Texas. “If there was already a grand jury in Alexandria looking at Flynn, there would be no need to reinvent the wheel for the same guy. This suggests that the investigation is bigger and wider than Flynn, perhaps substantially so.”

Speaking to the WSJ, Ty Cobb – special counsel to the president – said he wasn’t aware that Mueller – who is investigating Russia’s efforts to influence the 2016 election and whether President Donald Trump’s campaign or associates colluded with the Kremlin – had started using a new grand jury. “Grand jury matters are typically secret,” Mr. Cobb said. “The White House favors anything that accelerates the conclusion of his work fairly.…The White House is committed to fully cooperating with Mr. Mueller.

The WSJ adds that prior to Mueller’s assignment as special counsel, federal prosecutors had been using at least one other grand jury, located in Alexandria, Va., to assist in their criminal investigation of Michael Flynn, a former national security adviser. That probe, which has been taken over by Mr. Mueller’s team, focuses on Mr. Flynn’s work in the private sector on behalf of foreign interests.

A grand jury in Washington is also more convenient for Mr. Mueller and his 16 attorneys—they work just a few blocks from the U.S. federal courthouse where grand juries meet—than one that is 10 traffic-clogged miles away in Virginia.

Does this mean the worst is coming for Trump? Thomas Zeno, a federal prosecutor for 29 years before becoming a lawyer at the Squire Patton Boggs law firm, said the grand jury is “confirmation that this is a very vigorous investigation going on.”

“This doesn’t mean he is going to bring charges,” Mr. Zeno cautioned. “But it shows he is very serious. He wouldn’t do this if it were winding down.”

The grand jury news comes following a report that Congress is seeking to protect Mueller’s independence after Sens. Thom Tillis (R., N.C.) and Chris Coons (D., Del.) introduced legislation Thursday making it harder for Trump to fire Mueller. Under the legislation, a special counsel could challenge his or her removal, with a three-judge panel ruling within 14 days on whether the firing was justified.

As a reminder, Mueller has assembled a team of prosecutors and lawyers specializing in criminal and national security law. Twelve attorneys are on temporary assignment to the special counsel’s office from the Justice Department or FBI, and three came from Mr. Mueller’s firm of WilmerHale.

Trump has repeatedly questioned the neutrality of Mr. Mueller’s office, telling Fox News he is concerned that Mueller’s prosecutors are “Hillary Clinton supporters” and that Mueller and Comey are friends. Comey was a top Justice official in the George W. Bush administration when Mr. Mueller was the FBI director; both are Republicans.

Adding some credence to Trump’s allegations is that at least eight members of Mr. Mueller’s team have given to Democratic candidates, including the presidential campaigns of Obama and Clinton, according to Federal Election Commission records, although at least one, James Quarles, an original member of the Watergate Special Prosecution Force, donated to politicians in both parties.

While we await Trump’s response, this is how the market reacted to the news. 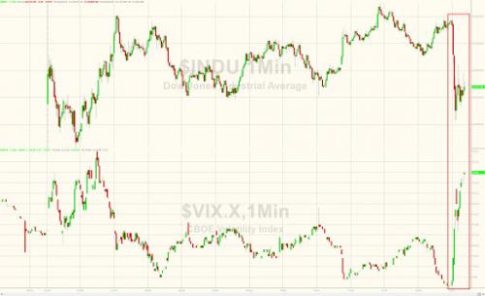