IF Trump would be the real deal and not just another elite puppet (as I’ve said he is before the election – just like I did with Killary) he would have vetoed this bill, even if, or better especially if…

“Since the bill sailed through Congress with a veto-proof majority, his only options were to sign it or to veto it and then endure the humiliation of seeing Congress — controlled by his own party — override him with ease, as lawmakers in both parties pledged to do.“

…, because that would have at least sent a clear sign to America, but Trump, like Obama, Clinton and Bush, is a Freemason and an elite puppet.

– Trump: “Thank Congress That US-Russia Relations Are At All-Time And Dangerous Lows”:

Our relationship with Russia is at an all-time & very dangerous low. You can thank Congress, the same people that can’t even give us HCare!

On Wednesday Trump similarly lashed out at Congress when signing the legislation, arguing the bill limited his executive power and ability to negotiate with Moscow.

“By limiting the executive’s flexibility, this bill makes it harder for the United States to strike good deals for the American people, and will drive China, Russia, and North Korea much closer together,” Trump said in a sharply worded statement.  He also said the bill was “seriously flawed” and included “a number of clearly unconstitutional provisions.”

Trump has in the past faced backlash for his attempts to form ties with Russia and its leader, Vladimir Putin. His comments come amid widening investigations into whether his associates colluded with Moscow during the 2016 presidential election.

Trump’s escalating fight with Congress republicans comes at a troubling time for the president: just as his approval ratings plumb all time lows, and just over a month before the critical negotiations over the US debt ceiling are set to take place. Failure to reach agreement there would lead not only to government shutdown, but also a technical default.

It appears the new ‘narrative’ from The White House is simple – keep distracting from the failures of massive policy reforms, and focus on the stock market and soft-survey hype.

Business is looking better than ever with business enthusiasm at record levels. Stock Market at an all-time high. That doesn’t just happen!

But, as we noted yesterday, “business” doing well may not mean what he hopes it does… (as we noted previously). With corporate profits rising rapidly in recent years, this has been almost exclusively at the expense of wages and compensation. This is shown in the chart below, which shows that while the profit share of GDP has stabilized over the past quarter, labor Share of GDP is at an all time low, and has fallen further in recent periods. And while labor share of GDP may increase as wages (finally) grow rises, increased capex, especially into productive assets, will limit this growth. 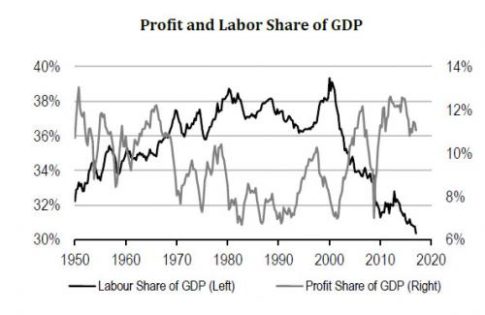 The chart is especially troubling for Trump because it was the collapse in the labor share of GDP that prompted the populist revulsion against the status quo, and got Trump elected in the first place. Should Trump wish to cheer the record divergence between the corporate and labor share of GDP, his days in the White House may be even more curtailed expected.

So taking full credit for it (not the central banks of the world), and adding that he’s still working on it…

I am continuing to get rid of costly and unnecessary regulations. Much work left to do but effect will be great! Business & jobs will grow.

We wonder who he will blame if/when stocks actually fall, or confidence slumps? Congress?