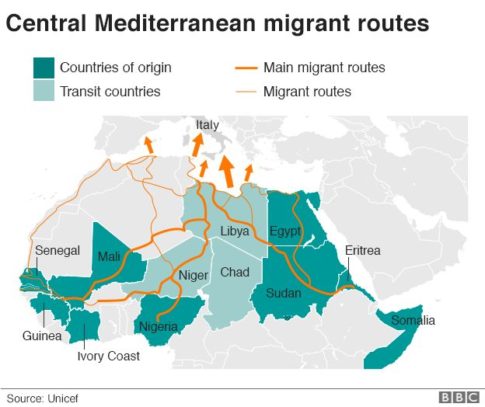 In the latest shot across the bow by Italy in Europe’s latest refugee crisis, BBC and AP report that the Italian Coast Guard has impounded a German NGO migrant rescue boat and is questioning its crew on the isle of Lampedusa, amid a growing dispute over Italy’s code of conduct for handling migrants at sea. Lampedusa is a tiny Italian island near North Africa which has struggled to house boatloads of migrants in recent years.

The Iuventa, which is operated by the German NGO Jugend Rettet previously discussed in “NGO Fleet Bussing Migrants Into The EU Has Ties To George Soros, Hillary Clinton Donors“, called the Italian check “a standard procedure”.

The reason for the escalation is that Jugend Rettet, Doctors Without Borders (MSF) and various other aid NGOs have rejected a new Italian “code of conduct” when it comes to dealing with refugees, according to which Italy plans to send warships close to the Libyan coast to pick up migrants, bypassing Europe’s NGO fleet altogether. According to BBC, the Italian parliament is debating the plan, which has already been agreed upon by the government, and aims to stopping the flow of unstable, overcrowded migrant boats across the Mediterranean to Italy.

A tweet from Jugend Rettet (Youth Rescues) said the Iuventa “was not confiscated. Our crew is not arrested. What happened is a standard procedure,” it said.

The IUVENTA was not confiscated. Our Crew is not arrested. What happened is a standard procedure. We wait for more Infos.

One week ago, Libya asked for Italian naval support in its battle against human smugglers operating in its territorial waters, a move that Rome has long considered vital to stemming the wave of migration from north Africa to Europe.  After meeting Fayez al-Serraj, head of Libya’s UN-backed government, Paolo Gentiloni, Italy’s prime minister, said the request was being weighed by the Italian defence ministry.  Most of the migrants arriving in Italy set off from a stretch of coastline west of Tripoli, the Libyan capital.

“It is very relevant news in the fight against human trafficking in Libya, if we respond positively. I believe this is necessary,” said Mr Gentiloni.

Italy has already offered the Libyan coast guard aid and training to intercept migrants before they reach international waters. Even so, the Libyan coast guard’s ability to monitor its coastline is limited by a lack of resources and the weakness of Mr Serraj’s government, which has struggled to exert its influence beyond Tripoli.

As the FT reported last week, the breakthrough on the joint Libyian-Italian naval missions came a day after Serraj met General Khalifa Haftar, a renegade military officer whose forces control much of eastern Libya, to try to forge a peace deal and move to elections next year. Serraj and Gen Haftar met in Paris, shepherded by Emmanuel Macron, the French president, in a diplomatic move which as discussed previously infuriated Rome as Italy is at the centre of diplomatic activity in Libya.

On Monday three out of nine aid NGOs nine operating in the central Mediterranean, accepted the Italian code of conduct. But MSF and Jugend Rettet object to the requirement for armed police to board their ships and for rescuers to stop transferring migrants from one ship to another. They want to minimise their trips back to port, because those trips cost them precious time and money.

As a reminder, Médicins Sans Frontiéres also operates several ships in the migrant fleet – the Dignity 1, the Bourbon Argos and the  Aquarius. As reported previously, MSF has received funding from George Soros’ Open Society Foundation.

Meanwhile, Italy which has expressed growing frustration and recently anger with Europe’s unwillingness to assist it with its growing refugee problem which has resulted in nearly 100,000 migrants landing in Italy with an uncertain future, says its naval deployment is being negotiated with the UN-recognised Libyan government in Tripoli, led by Prime Minister Fayez Sarraj. Sarraj said his administration had agreed to receive only training and arms from Italy. “Libya’s national sovereignty is a red line that nobody must cross,” he said.

The Libyan foreign ministry later said preventing the illegal flow of migrants – a lucrative business for people smugglers – “may require the presence of some Italian naval vessels to work from Tripoli’s maritime port, for this purpose only“. But Italy’s role would have to be coordinated with the Libyan authorities, the statement said.

As reported previously, more than 94,000 migrants have crossed the Mediterranean to Italy so far this year, – a record number. More than 2,370 have died trying to reach Italy.

Migrants picked up in Libyan coastal waters – and not international waters – can be legally returned to Libya, but aid workers say conditions in migrant reception camps there are dire, in large part because nobody else in Europe wants to grant the refugees currently in Italy access. Since 2015 as many as a dozen NGO aid ships have been patrolling off Libya to pick up migrants in distress. So far this year they have handled 35% of the rescues, Italy’s Coast Guard says.