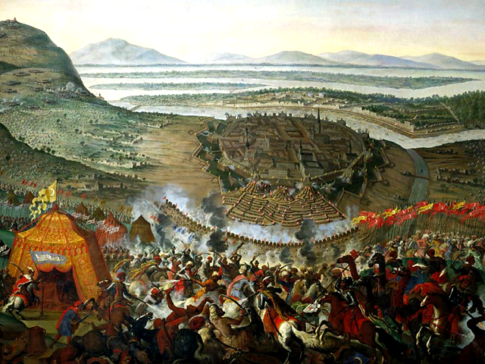 Europe is full of ‘Last men’ (and perhaps women, I suppose we are now forced to say, given the incessant demand for political correctness).

Why is this so and who will come to dwell in these territories we have hitherto called — home?

We are not talking about some imaginary seven kingdoms, as in the legendary but fictional television series, Game of Thrones, either. The point of contention is about a real place, with real peoples, and real nations that have existed for centuries on end, perhaps thousands of years—called Europa.

Trends in immigration suggest what can only be termed, a self-imposed European death wish.

Look at any demographic map, preferably an interactive one.

Of the 7.5 billion people presently on this earth, the vast majority, mostly in the Southern hemisphere, and who are generally poor and backward, are trying to get to the Northern hemisphere, where there are greater opportunities and overly generous welfare states. In recent polls 7 out 10 people from these lands say, given the chance, they want to flee their plight.

The last decade has seen more refugees, migrants and economic immigrants than at any point in human history: tens, if not hundreds of millions. They are dying in transit, drowning on the Mediterranean Sea and suffocating in the back of trucks, as was the case, yet again in Texas this past week.

Human trafficking is big business. The International Organization for Migration estimates that more than 1,000,000 migrants arrived in Europe by sea in each of the last three years, and tens if not hundreds of thousands more, by land.

The numbers are astounding and only increasing. Some 5,000 new migrants arrive on the shores of Italy alone every day.

The U.S. estimates it is now populated by millions of illegal and undocumented immigrants. In fact, about one-fourth of the 42.4 million foreign-born people living in the United States today are illegal immigrants – this amounts to roughly 10.5 million, according to an objective study by the Center for Immigration Studies.

Geostrategists cannot comprehend billions (yes, potentially billions) of people moving from South to North. They can’t comprehend the risk or the total effects of this — a world without borders. Yet it is something that globalist political leaders and flat worlders actually seek and actively endorse.

Europe will change. This will happen… is happening, in our lifetimes, with globalist elites endorsing it as benign or even laudatory. The ‘anywhere’ crowd with no attachment to place, custom or religion, favor such open borders.

The ‘somewhere’ folks who still have some degree of loyalty to national identity, tradition and religion do not share the same attitude. As the global elites get their way we witness the end of Europe and the emergence of the Last man.

And who is this Last man?

The Last man (in German, der letzte Mensch), is a description used by the philosopher Friedrich Nietzsche in Thus Spoke Zarathustra to describe men tired of life, who take no risks, and seek only comfort and idle security.

They exist without purpose or direction. Their lives are pacifist and comfortable. There is no longer any distinction between strength and weakness, excellence and mediocrity. Social conflict and challenges are defined out of existence. Everyone lives equally and in a “superficial” harmony of no consequence. There is no originality or flourishing social trends or ideas, merely fashions. There is no innovation or creativity. Individuality and thinking are suppressed.

According to Nietzsche, the Last man is the goal that modern society and western European civilization have set for themselves. Those writers who have sought to warn about this have failed to date.

Guardian: Save The Planet, Have Fewer Children https://t.co/eN1pzq5m7E

Nietzsche warned that the society of the Last man could be too barren and decadent to support the growth of healthy human life or great individuals. The Last man is only possible by mankind having bred an apathetic person who is unable to dream, who are unwilling to take risks, and simply earn their meager living and try to keep warm.

Even having children or concern for future generations is too much of a challenge and inconvenience. Leadership is nothing more than a greater degree of things and creature comfort. They are willing to make any temporary compromise so as to maintain their ease.

The Last man, Nietzsche predicted, would be our response to the problem of nihilism.

Is Europe today ever closer to what Nietzsche described? Has European decadence and anomie, adrift from its original moorings and spirituality, and more and more awash in a sea of unassimilated and perhaps unassimilable immigrants, with yet more on the way, brought us to this state?

Others have described the onslaught of Islamist immigrants who come to the west to exploit its wealth and flee the scourge of poverty and war of the places they have vacated. They bring with them cultures of hate and the practice of terror as they find no way to immanentize their eschaton and instead end up hating the very new places they inhabit and the way of life that has sustained it for centuries.

Picture The Jungle, the notorious migrant camp outside of Calais that typifies this result.

In their stead, they create what Raheem Kassam calls separatist “no go zones” of sharia law and so-called ‘honor killings’ and murder. They are discontented, unattached, and strike out in terror — rebelling against life itself. Such horrific events we are told are now “normal” in places like Nice, Paris, Munich, Madrid, Cologne, Manchester and London.

Our political elites, the very globalists who have opened the borders, say accept this new reality as the way of life, the new normal. It is less challenging to analogize this problem to the older problem of assimilating “European” immigrants.

This is what the British conservative philosopher, Roger Scruton lamented when he said, “Put simply, the citizens of Western states have lost their appetite for foreign wars; they have lost the hope of scoring any but temporary victories; and they have lost confidence in their way of life. Indeed, they are no longer sure what that way of life requires of them.”

If present trends continue, and every evidence — from Merkel to Macron, from Sweden to Canada suggests it will (Trump excluded) — the migrants will not abate. They will continue to come (mostly single males of young adult status) on mass to open and willing arms.

Make no mistake this is nothing less than the utter and complete transformation of Europe into Eurabia, a cultural and political appendage of the Arab and Afro/Muslim world. This Eurabia is fundamentally anti-Christian, anti-Western, anti-American, and anti-Semitic.

And with every passing day, we see the further demise of the West, the onslaught of Eurabia (which could not be won at the gates of Vienna in 1683) and the nihilism — of the Last man.