After a brief delay, the first bitcoin cash blocks have been mined and trading in the new cryptocurrency has begun – albiet at a sizable discount to bitcoin.

By comparison, bitcoin is trading at $2,700, and ethereum at $219, according to CoinMarketCap.

After more than two years of internecine struggles over how to expand bitcoin’s ability to quickly process transactions, the long-feared bitcoin “day of reckoning” has arrived. The bitcoin network has split into two separate blockchains, causing the creation of a new cryptocurrency twin to the original bitcoin.

In the meantime, the collapse that some bitcoin doomsayers envisioned has so far yet to materialize; the original cryptocurrency was off 3% in recent trade, while most of its peers were higher on the day. 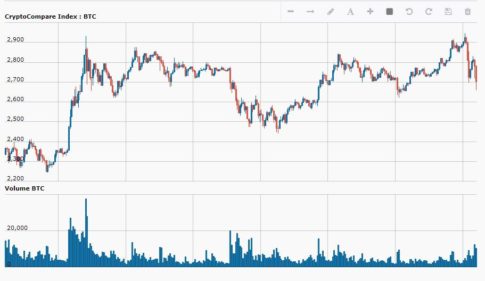 After announcing Saturday that they would go ahead with the fork, bitcoin miners running the alternative bitcoin software will soon begin producing the new coin, known as bitcoin cash. Bitcoin cash raises the limit of how much data can be stored in a single “block” on the bitcoin blockchain, which proponents say will help increase transaction speeds while tamping down rising transaction costs.
Though no blocks of bitcoin cash have yet been mined, Kraken, one of the most popular US exchanges, has added it to its interface.

Bitcoin cash trading live on Kraken, though none yet exists. So fascinating to watch.

Other exchanges are still figuring out how they will handle cash, according to CNBC.

“Coinbase said it will not support the new bitcoin cash. The firm operates the GDAX exchange, which said in an email alert it has temporarily disabled bitcoin withdrawals and deposits Tuesday “in preparation for the upcoming fork.”

Bitfinex, which has nearly a third of U.S.-dollar bitcoin trade volume, tweeted Tuesday morning that “We will stop processing $BTC deposits at noon UTC until the situation has settled. Deposits after that time will not be eligible for $BCH.”As of press time, bitcoin cash miners were still waiting for the first new coin to be processed, according to CoinDesk.

According to Btcforkmonitor.info, the bitcoin blockchain has produced 478562 blocks, compared to 478,558 for the alternative Bitcoin Cash blockchain.

At press time, miners dedicating computing power to that blockchain were still looking for their first block, an event that would mark the formal creation of its cryptocurrency.

Bitcoin cash is supported by a minority of miners and developers who objected to a feature of the more popular Segwit2x update that would’ve improved the digital currency’s scalability by routing more transaction data over peripheral networks, thereby taking pressure off the main blockchain. Segwit2x will also increase the bitcoin blockchain’s block size to 2 megabytes. According to Shapeshift CEO Erik Vorhees, the only major mining pools that support cash are ViaBTC and Bitcoin.com.

#bitcoinCash has not forked but behind other nodes #bitcoin pic.twitter.com/p5CC0mk86B

Segwit2x has the support of most of the community’s miners. Data from blockchain.info show that 90% of the network’s mining power is signaling support for Segwit2x, higher than the 80% threshold needed to make the software update official.

If recent moves are any indication, Tuesday will be a wild day in cryptocurrency markets as investors wait to see how the market will react to bitcoin cash. Ethereum endured a similar network split last summer that created Ethereum Classic, a separate token that’s seen its price plunge as investors favored the original Ethereum token over its newly created peer. Now investors are wondering: Will a similar dynamic play out with bitcoin and bitcoin cash?