In a study to examine how effective different varieties of onion are at killing cancer cells, a team of scientists at the University of Guelph has found that not all of them are created equal. 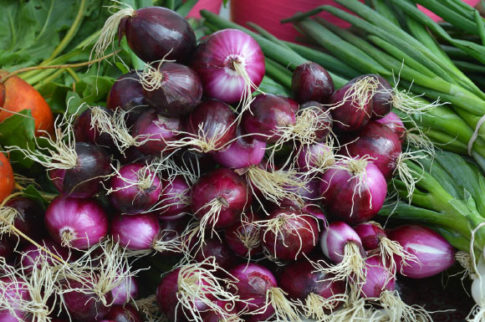 “We investigated the bioactive properties of five Ontario grown varieties of onion and assessed their capacity to exert cytostatic/cytotoxic effects on a relevant human colorectal cancer cell line,” the researchers said.

“These extracts significantly induced apoptosis, reduced the rate of proliferation, and slowed the migration of cancer cells into an exclusion zone. Importantly, these effects were at least comparable, and often stronger, than those of the commercially available pure flavonoid compounds.”

“Although positive results were observed at the highest tested concentration (1:10 dilution of onion extracts), the marked success of our crude onion extract supports the notion that dietary supplementation or even the use of a fairly inexpensive onion extract could have potent anti-cancer effects.”

“We found onions are excellent at killing cancer cells,” said study first author Abdulmonem Murayyan, a PhD student at the University of Guelph.

“Onions activate pathways that encourage cancer cells to undergo cell death. They promote an unfavorable environment for cancer cells and they disrupt communication between cancer cells, which inhibits growth.”

According to the team, onions contain one of the highest concentrations of quercetin, a type of flavonoid, and Ontario onions boast particularly high levels of the compound compared to some parts of the world.

“The study revealed that the red onion not only has high levels of quercetin, but also high amounts of anthocyanin, which enriches the scavenging properties of quercetin molecules,” Murayyan said.

“Anthocyanin is instrumental in providing color to fruits and vegetables so it makes sense that the red onions, which are darkest in color, would have the most cancer-fighting power.”

These findings follow a recent study by the team on new extraction technique that eliminates the use of chemicals, making the quercetin found in onions more suitable for consumption.

“Other extraction methods use solvents that can leave a toxic residue which is then ingested in food. This new method that we tested to be effective only uses super-heated water in a pressurized container,” Prof. Neethirajan said.

“Developing a chemical-free extraction method is important because it means we can use onion’s cancer-fighting properties in nutraceuticals and in pill form.”

The research was published in the June 2017 issue of the journal Food Research International.