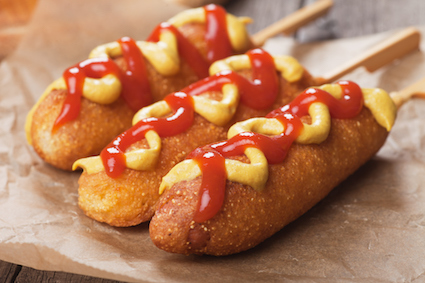 IF Britain strikes a new trade deal with the US, what low-quality food will be on your menu?

Pig-flavour Chunky Bits
Made from the parts of pigs no one knew existed, such as the ‘inner flange’ and the ‘duct hole’. The resulting product tastes so unlike pork it has to be flavoured with the equally mysterious ‘bacon concentrate’.

American chocolate
Actually a form of edible plastic, American chocolate is incredibly sweet with a watery, milk-like flavour that leaves an oily residue in your mouth. Preferred by most Americans to real chocolate because they actively enjoy nausea.

Hydrochloric acid corn dogs
A version of the original disgusting concoction of a cheap hotdog on a stick coated in cornmeal batter, but doused in hydrochloric acid to extend its sell-by date. Can also be used to remove graffiti.

Substi-fruit
Artificial fruit encompassing everything from apples and orange to figs and lychees. Using a complex chemical process, compacted lard is made into objects that look identical to real fruit but are flavoured with pungent chemicals normally used in air fresheners.

Fisho
Made from waste parts of fish including fins and eyeballs, Fisho is almost indistinguishable in taste and texture from cheap real fillets and contains 9,800 calories per serving.

Mom’s Traditional Southern-style Hickory Beef
Highly toxic meat substitute made from gravel softened in ammonia. Flavoured with the chemical DBT 11, originally developed as a defoliant during the Vietnam War.

Dairyfresh Cheese
A vast army of lawyers employed by the Dairyfresh Cheese Corporation prevents anyone in the US finding out the cheese is actually made from bleached and disinfected moose excrement. Hugely popular despite its bland ‘nothing’ taste.

‘Meat’
Little is known about the exact contents of ‘meat’ except that its manufacturer, The ‘Meat’ Company of Detroit, busses in large numbers of homeless people to work at its vast rendering plant.