I saw this meme on an Internet chat forum: 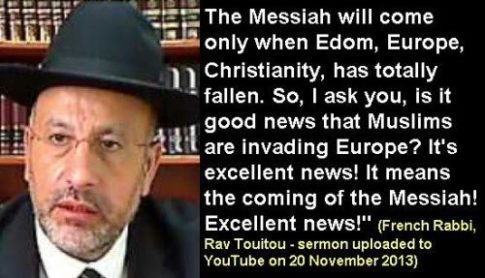 Touitou’s belief is eerily similar to that of ISIS or the Islamic State, who maintain that we are in the end days and that the role of ISIS is to hasten the apocalypse and the arrival of the Muslim messiah, Mahdi, who will lead Muslims to victory before the end of the world.

Here’s the text of what Rabbi Touitou said in the above meme, and the Google Translation from English into French:

“The Messiah will come only when Edom, Europe, Christianity has totally fallen. So I ask you, is it good news that Muslims are invading Europe? It’s excellent news! It means the coming of the Messiah! Excellent news!”

I don’t like secondary sources, and always strive to find the primary source for something.

So I went searching and found this video of Rabbi Touitou saying those words:

Some comments on the above video from the video’s LiveLeak page:

“rare glimpse into the modern jew and how they see goyim. i tell ppl all the time they are no better than muslims, and they just stare at me like wtf”

“Zionism = Wahhabism = Salafism the same shithole. Israel make war by proxy in Iraq and Syria for making their satanic agenda.”

“Again it is the Jews benefitting.”

“and some people ask themselves why so much nations persecuted or kicked the jews out in the last 5000 years.”

“See, people. I’ve told you this. You block me. You tell me I’m a ‘racist’ or ‘anti-Semitic’. Jews are the biggest racist there is. While keeping their culture safe in gated communities, they want to flood yours and mine with madness and then call you a racist when you say anything about it. These jews are hell-bent on destroying all other people.”

“Radical Judaism is not unlike radical Islam. The Jews who are Zionists instigate and perpetuate there long term plan to destroy the order of the world through there corruption of the global order. Chaos.”

“Why would god choose the people who murdered his son? Make any sense?”

In an interview with the blog European Civil War, Les Brigandes said their purpose is to defend French culture:

“We defend the freedom of peoples and communities to organize and live in accordance with their consciousness, their customs, and their beliefs. We thus defend diversity against the standardizations of globalism….

[T]the globalist oligarchy continues to advance by crushing all national, religious, familial, and natural obstacles. One thing particularly new that can be noted is the madness of the immigrant invasion: for the first time, governments organize the invasion of their own countries, and pay the invaders with their own peoples’ money!

There is a purpose to this, obviously. An economic purpose (lower salaries, a new class of rootless people more disposed to buy and consume in the West than in Zimbabwe or Libya), a cultural purpose (pauperizing the masses and destroying their identity), but also, which is never said, a messianic purpose. In truth, the oligarchy, in concert with the global religions, is getting ready to unify internationally the masses of the entire world, including their religious motivations, for the purpose of definitively consolidating the New World Order. We see this in the ecumenical politics conducted by personages like the Dalai Lama or Pope Francis. The migratory crisis accelerates the process. There are two possible solutions to the crisis:

1) A progressive fusion of these Muslim masses with the European peoples (both adopting the new American conformity). This would pertain to a syncretist evolution. In current conditions, this hypothesis is highly unlikely, given the orientation of conquering Islam, which is not participating in the dialogue.

2) A crisis that will never stop growing and which could culminate in a declared civil war. Such a crisis can only favor a yet louder cry for global unity, religious as well as political, just as the last two world wars favored the emergence of a world government to keep the peace. A crisis always calls for a solution, and the masses are always more disposed to accept the tyranny of peace and ‘love’ after a war that might have robbed them of life.

In either case, massive immigration will further the program of worldwide political and religious unification, which the Christian tradition names ‘the reign of Antichrist.’“