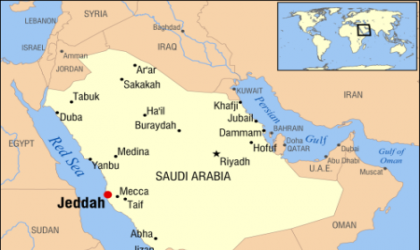 – The Dönmeh: The Middle East’s Most Whispered Secret (Part II):

An Iraqi Mukhabarat (General Military Intelligence Directorate) Top Secret report, “The Emergence of Wahhabism and its Historical Roots,” dated September 2002 and released on March 13, 2008, by the U.S. Defense Intelligence Agency in translated English form, points to the Dönmeh roots of the founder of the Saudi Wahhabi sect of Islam, Muhammad ibn Abdul Wahhab. Much of the information is gleaned from the memoirs of a “Mr. Humfer,” (as spelled in the DIA report, “Mr. Hempher” as spelled the historical record) a British spy who used the name “Mohammad,” claimed to be an Azeri who spoke Turkish, Persian, and Arabic and who made contact with Wahhab in the mid-18th century with a view of creating a sect of Islam that would eventually bring about an Arab revolt against the Ottomans and pave the way for the introduction of a Jewish state in Palestine. Humfer’s memoirs are recounted by the Ottoman writer and admiral Ayyub Sabri Pasha in his 1888 work, “The Beginning and Spreading of Wahhabism.”

In his book, The Dönmeh Jews, D. Mustafa Turan writes that Wahhab’s grandfather, Tjen Sulayman, was actually Tjen Shulman, a member of the Jewish community of Basra, Iraq. The Iraqi intelligence report also states that in his book, The Dönmeh Jews and the Origin of the Saudi Wahhabis, Rifat Salim Kabar reveals that Shulman eventually settled in the Hejaz, in the village of al-Ayniyah what is now Saudi Arabia, where his grandson founded the Wahhabi sect of Islam. The Iraqi intelligence report states that Shulman had been banished from Damascus, Cairo, and Mecca for his “quackery.” In the village, Shulman sired Abdul Wahhab. Abdel Wahhab’s son, Muhammad, founded modern Wahhabism.

The Iraqi report also makes some astounding claims about the Saud family. It cites Abdul Wahhab Ibrahim al-Shammari’s book, The Wahhabi Movement: The Truth and Roots, which states that King Abdul Aziz Ibn Saud, the first Kingdom of Saudi Arabia monarch, was descended from Mordechai bin Ibrahim bin Moishe, a Jewish merchant also from Basra. In Nejd, Moishe joined the Aniza tribe and changed his name to Markhan bin Ibrahim bin Musa. Eventually, Mordechai married off his son, Jack Dan, who became Al-Qarn, to a woman from the Anzah tribe of the Nejd. From this union, the future Saud family was born.

The Iraqi intelligence document reveals that the researcher Mohammad Sakher was the subject of a Saudi contract murder hit for his examination into the Sauds’ Jewish roots. In Said Nasir’s book, The History of the Saud Family, it is maintained that in 1943, the Saudi ambassador to Egypt, Abdullah bin Ibrahim al Muffadal, paid Muhammad al Tamami to forge a family tree showing that the Sauds and Wahhabs were one family that descended directly from the Prophet Mohammed.

At the outset of World War I, a Jewish British officer from India, David Shakespeare, met with Ibn Saud in Riyadh and later led a Saudi army that defeated a tribe opposed to Ibn Saud. In 1915, Ibn Saud met with the British envoy to the Gulf region, Bracey Cocas. Cocas made the following offer to Ibn Saud: “I think this is a guarantee for your endurance as it is in the interest of Britain that the Jews have a homeland and existence, and Britain’s interests are, by all means, in your interest.” Ibn Saud, the descendant of Dönmeh from Basra, responded: “Yes, if my acknowledgement means so much to you, I acknowledge thousand times granting a homeland to the Jews in Palestine or other than Palestine.” Two years later, British Foreign Secretary Lord Balfour, in a letter to Baron Walter Rothschild, a leader of the British Zionists, stated: “His Majesty’s government view with favor the establishment in Palestine of a national home for the Jewish people . . .” The deal had the tacit backing of two of the major players in the region, both descendant from Dönmeh Jews who supported the Zionist cause, Kemal Ataturk and Ibn Saud. The present situation in the Middle East should be seen in this light but the history of the region has been purged by certain religious and political interests for obvious reasons.

After World War I, the British facilitated the coming to power of the Saud regime in the former Hejaz and Nejd provinces of the Ottoman Empire. The Sauds established Wahhabism as the state religion of the new Kingdom of Saudi Arabia and, like the Kemalist Dönmeh in Turkey, began to move against other Islamic beliefs and sects, including the Sunnis and Shi’as. The Wahhabi Sauds accomplished what the Kemalist Dönmeh were able to achieve in Turkey: a fractured Middle East that was ripe for Western imperialistic designs and laid the groundwork for the creation of the Zionist state of Israel.

During two visits to Turkey in 2010, I had the opportunity of discussing the Ergenekon “deep state” with leading Turkish officials. It was more than evident that discussions about the Ergenekon network and its “foreign” connections are a highly-sensitive subject. However, it was also whispered by one high-ranking Turkish foreign policy official that there were other “deep states” in surrounding nations and Egypt, Saudi Arabia, Jordan, and Syria were mentioned by name. Considering the links between Ergenekon and the Dönmeh in Turkey and the close intelligence and military links between the Dönmeh-descendent Sauds and Wahhabis in Arabia, the reports of close links between ousted Egyptian President Hosni Mubarak and his intelligence chief Omar Suleiman and the Binyamin Netanyahu government in Israel may be seen in an entirely new light… And it would explain Erdogan’s support for Egypt’s revolution: in Turkey, it was a democratic revolution that curbed the influence of the Dönmeh. The influence of Wahhabi Salafists in Libya’s new government also explains why Erdogan was keen on establishing relations with the Benghazi-based rebels to help supplant the influence of the Wahhabis, the natural allies of his enemies, the Dönmeh (Ergenekon) of Turkey.

Erdogan’s desire to set the historical record straight by restoring history purged by the Kemalists and Dönmeh has earned him vitriolic statements from Israel’s government that he is a neo-Ottomanist who is intent on forming an alliance with the Muslim Brotherhood in the Arab countries. Clearly, the Dönmeh and their Zionist brethren in Israel and elsewhere are worried about Dönmeh and Zionist historical revisionism, including their role in the Armenian and Assyrian genocide, and their genocide denial being exposed.

In Egypt, which was once an Ottoman realm, it was a popular revolution that tossed out what may have amounted to the Dönmeh with regard to the Mubarak regime. The Egyptian “Arab Spring” also explains why the Israelis were quick to kill six Egyptian border police so soon after nine Turkish passengers were killed aboard the Mavi Marmara, some in execution style, by Israeli troops. Dönmeh doctrine is rife with references to the Old Testament Amalekites, a nomadic tribe ordered attacked by the Hebrews from Egypt by the Jewish God to make room for Moses’s followers in the southern region of Palestine. In the Book of Judges, God unsuccessfully commands Saul: “Now go and strike Amalek and devote to destruction all that they have. Do not spare them, but kill both man and woman, and infant, ox, and sheep, camel and donkey.” The Dönmeh, whose doctrine is also present in Hasidic and other orthodox sects of Judaism, appear to have no problem substituting the Armenians, Assyrians, Turks, Kurds, Egyptians, Iraqis, Lebanese, Iranians, and Palestinians for the Amalekites in carrying out their military assaults and pogroms.

With reformist governments in Turkey and Egypt much more willing to look into the background of those who have split the Islamic world, Ataturk in Turkey and Mubarak in Egypt, the Sauds are likely very much aware that it is only a matter of time before their links, both modern and historical, to Israel will be fully exposed. It makes sense that the Sauds have been successful in engineering a dubious plot involving Iranian government agents trying to assassinate the Saudi ambassador to Washington in an unnamed Washington, DC restaurant. The Iraqi intelligence report could have been referring to the Zionists and Dönmeh when it stated, “it strives to . . . [the] killing of Muslims, destructing, and promoting the turmoil.” In fact, the Iraqi intelligence report was referring to the Wahhabis.

With new freedom in Turkey and Egypt to examine their pasts, there is more reason for Israel and its supporters, as well as the Sauds, to suppress the true histories of the Ottoman Empire, secular Turkey, the origins of Israel, and the House of Saud. With various players now angling for war with Iran, the true history of the Dönmeh and their influence on past and current events in the Middle East becomes more important.