And Soros is only following Rothschilds orders. 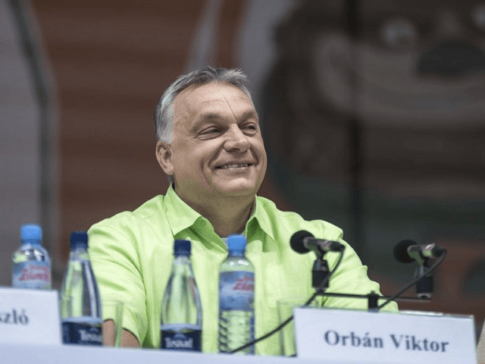 Hungarian Prime Minister Viktor Orban has made an impassioned defence of European values and identity at the Bálványos Summer University camp in Romania Saturday, calling on European nations to end their association with billionaire open-borders financier George Soros.

Speaking at the 28th Bálványos Open University camp Saturday, which was this week was hailed as “one of the most important discussion forums of the Hungarian community” by Hungary’s deputy Prime Minister, Orban contributed to an apparently new tradition of the Hungarian PM using the event as a launch pad for pro-European rhetoric and policy.

Hitting out at the Hungarian-born billionaire George Soros, who stands accused by the Hungarian government of using his vast wealth to fund pro-mass migration organisations to create a “new, mixed, Muslimized Europe”, Orban said Brussels was in an “alliance against the people’s will” with the financier.

Laying out his vision for a future Europe without the influence of Soros, Orban said: ““In order for Europe to be able to live, it has to win back its sovereignty from the Soros Empire… Once this is done, migrants must be taken back outside the EU. It sounds strict, but those who came illegally, must be transported back,” Prime Minister Orbán said. “We have to admit that the European continent cannot remain unprotected.”

Discussing immigration to Hungary in a speech that came just days after his government announced the total requests submitted for Hungarian citizenships had hit one million, Orban said he would continue to oppose migrants “who could change the country’s cultural identity”.

As long as I remain the prime minister, the fence will stay in place. We will protect Hungary and Europe.

We can never be in solidarity with ideals, peoples and ethnic groups who set out with the goal to change European culture… because the end result is collapse.

Speaking of this clash of cultures, Orban said: “the culture of migrants is opposed to European culture, conflicting ideas to not prevail at the same time”, and remarked that mass migration could not be the solution to economic problems. Doing as nations like Germany had for decades by importing foreign workers to prop up the economy, he compared to a man stranded on a desert island drinking sea water to survive: “That too is water, but the problem gets worse”.

Better, he said, was for European nations to have stable populations supported by birth rates that allowed for natural biological replacement. For Hungary to achieve that, the Prime Minister said, it would have to achieve a birth rate of 2.1 children per family — a figure presently unheard of among Europeans.

"Is something larger at stake? Yes, family decline is undermining civilisation itself…" https://t.co/WXBiChFlKc pic.twitter.com/Y5wSea33nI

Recognising that other Western and European nations were taking many migrants and seeing their cultures change as a result, Orban declared his nation’s borders open to like minded European, declaring that Hungary is a place where “Western European Christians will always be able to find security”.

Speaking just hours after Poland’s upper house passed a series of significant reforms to their judiciary, a move which has triggered significant threats of punishment from the European Union, Orban also offered solidarity with the people and government of the fellow Visegrad four nation.