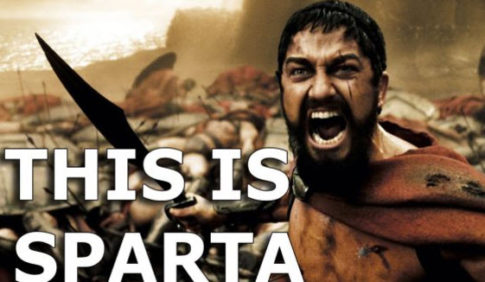 – Greek President Blasts Erdogan After Turkish Harassment: “Provocations Are Sign Of Weakness, Come & Get It!”:

KeepTalkingGreece.com reports that Greek president Prokopis Pavlopoulos sent a sharp worded message to his Turkish counter Recep Tayyip Erdogan, following a series of provocations accompanying his tour to the islands of the eastern Aegean Sea.

“The brave do not provoke,” President Pavlopoulos told Greek soldiers safeguarding the remote island of Ai Stratis. “Provocations, especially provocations without a reason, are characteristic signs of  weakness and insecurity.”

“What history and our ancestors taught us is “Molon Labe”, Pavlopoulos added citing the famous quote of Spartan King Leonidas I.

Molon labe (Greek: ????? ???? mol?n lavé), meaning “come and take [them]”, is a classical expression of defiance. According to Plutarch, Xerxes, king of Persia, demanded that the Spartans surrender their weapons and King Leonidas I responded with this phrase.

While Pavlopoulos’ helicopter was heading to islet Panagia, pilots received warning calls and threats from the Turkish armed forces. The Turks claimed the Greeks that they were flying in Turkish Flight Information Region. The Greek delegation ignored the Turkish warnings and the President landed safe in Panagia.

A day earlier, the Turkish armed forces called the Greek helicopters nearing the island of Rhodes to leave the area as “they were flying in a demilitarized zone” where such flights are forbidden.  The Greek pilots did not respond to the callings from the Turkish side.

A little later, the Turkish side called on the pilots of Shinook to leave the area as they were flying inside “the Turkish FIR.” On board were President Pavlopoulos, Defense Minister Panos Kammenos as well as the military leadership of the country.

In one incident, the military helicopters transporting Pavlopoulos suffered radio interference from Turkey.

Wednesday morning, a pair of Turkish F4 fighter jets entered the Athens Flight Information Region at 10 a.m. between Lesvos and Lemnos and flew over the Fournoi islets at 8,900 feet.

The Greek President told soldiers while visiting the island of Lemnos…

“There are no grey zones in the Aegean, neither disputes that move between absurdity and ridiculing,”

The president underlined that soldiers in remote areas safeguard the Greek borders that are also borders of the European Union and this according to the International Law.

“You are brave fighters and respond to provocations with Molon Labe!,” Pavlopoulos urged the members of the Greek Armed Forces.