– Is The US Government On The Verge Of Reading Minds?:

Researchers at Carnegie Mellon University recently made a scientific breakthrough using machine algorithms to accurately guess what people are thinking. In other words, as the university referred to it, they have “harness[ed] ‘mind reading’ technology to decode complex thoughts.” 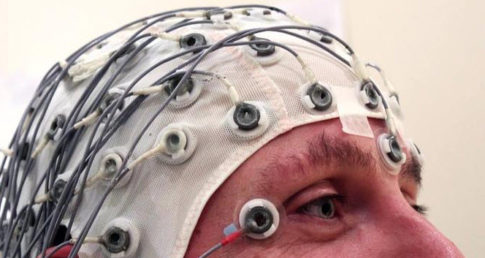 The researchers report that they can “now use brain activation patterns to identify complex thoughts, such as, ‘The witness shouted during the trial.’”

Though the technology does not identify the actual words, lead researcher Marcel Just, D.O. Hebb University Professor of Psychology in the Dietrich College of Humanities and Social Sciences, has made enough progress that “machine learning algorithms with brain imaging technology” can effectively ‘read minds.’

As the researchers’ press release explains:

“The new study demonstrates that the brain’s coding of 240 complex events, sentences like the shouting during the trial scenario uses an alphabet of 42 meaning components, or neurally plausible semantic features, consisting of features, like person, setting, size, social interaction and physical action.”

According to the study, published in Human Brain Mapping:

“Regression models were trained to determine the mapping between 42 neurally plausible semantic features (NPSFs) and thematic roles of the concepts of a proposition and the fMRI activation patterns of various cortical regions that process different types of information. Given a semantic characterization of the content of a sentence that is new to the model, the model can reliably predict the resulting neural signature, or, given an observed neural signature of a new sentence, the model can predict its semantic content.”

“Using the smart algorithm, the team could discern what was being thought about at any given time — and even the order of a particular sentence. After training the algorithm on 239 of the 240 sentences and their corresponding brain scans, the researchers were able to predict the final sentence based only on the brain data.”

They were able to make predictions with 87% accuracy and, in a reverse exercise, accurately predicted brain activity based on sentence information.

The research has concerning implications for the future of the criminal justice system. In 2013, Marcel Just shared his earlier findings — which, at that time, were less advanced — with Alan Alda of PBS. He said he saw “brain research playing a role in courtrooms because the judicial process often includes not only what an accused person did, but also what he or she was thinking when they did it.”

This is cause for concern as the technology progresses, but even more unsettling is who is funding the research and, evidently, has a stake in it: the Office of the Director of National Intelligence (ODNI) via the Intelligence Advanced Research Projects Activity (IARPA), an organization within ODNI.

According to the Office of the Director of National Intelligence’s own website, the government organization’s roots can be traced back to the early years of the CIA:

They claim this idea persisted, and following the 2001 terrorist attacks, George W. Bush codified the agency. In 2005, the ODNI was officially launched:

“In February 2005, the President nominated John D. Negroponte, ambassador to Iraq, as the first director of national intelligence and U.S. Air Force Lt. Gen. Michael V. Hayden as the first principal deputy DNI, promoting him to General. On April 21, 2005, in the Oval Office, Amb. Negroponte and Gen. Hayden were sworn in, and the ODNI began operations at 7 a.m. on April 22, 2005.”

John D. Negroponte is a British-born “diplomat” with questionable ties to authoritarian regimes. As Esquire reported after he endorsed Hillary Clinton in the 2016 election:

“In the 1980s, he served as the U.S. ambassador to Honduras. In addition to (at best) covering for that country’s murderous autocrats, he also served the Reagan Administration by helping to turn Honduras into a staging area for American-trained death squads in places like El Salvador and Guatemala.”

Michael Hayden, who has also served as head of both the NSA and CIA, is known largely for lying to Congress and the American people about the CIA’s use of brutal torture techniques against detainees. He also insisted the NSA’s warrantless wiretapping was legal long before whistleblower Edward Snowden ever exposed the extent of the agency’s surveillance.

These are the founding leaders of the agency currently financing research into reading people’s minds via its research wing, IARPA. They reported directly to President Bush, as the Director of ODNI is a chief adviser to the commander-in-chief.

The current Director of National Intelligence, Daniel Coats, a former Republican senator from Indiana, has a record similar to Hayden when it comes to protecting Americans’ privacy. He was appointed by President Trump, and during his confirmation hearing, he “said there need to be continued conversations about legal authorities to undermine encryption and called reauthorizing an authority that the government uses to spy on Americans’ Internet activities without a warrant his ‘top legislative priority,’” the Electronic Frontier Foundation reported.

He enthusiastically supports Section 702 of the Foreign Intelligence Surveillance Act, which has allowed for widespread mass spying on American citizens. “In answers to written questions prior to the hearing as well as during the hearing,” EFF noted, “Coats repeatedly praised the surveillance authority, calling it ‘a critical tool’ and agreed when Sen. John Cornyn quoted FBI Director James Comey’s description of the authority as the ‘crown jewels of the intelligence community.’”

In 2015, while he was a senator, he voted against the USA Freedom Act, which provided minor reforms while keeping bulk data collection intact. He refused to get behind the overwhelmingly popular, bipartisan legislation, which ultimately became law.

Further, while Coats was a senator, he voted in favor of the 2012 National Defense Authorization Act, which is now infamous for codifying the U.S. military’s right to indefinitely detain U.S. citizens without trial. Coats also voted for the 2013 version of the Act, which allowed the same violations.

Though the Trump Administration has indicated its intention to abolish the ODNI, currently, it remains in power under Coats direction. Its research arm, IARPA, touts its pursuit of “high-risk” research and is directly responsible for funding Carnegie Mellon’s mind-reading research. According to a post on its public Medium page, IARPA, founded in 2007,  serves all 17 agencies of the intelligence community and “has a singular goal —generating revolutionary capabilities for the U.S. Intelligence Community.”

Anti-Media has reached out to IARPA for comment on how they intend to apply the developing mind-reading technology and will update this article if they respond.

Though Coats is obviously not in charge of funding Just’s research directly, his positions on civil liberties and privacy inevitably color the attitude of the agency he controls. Should the American people trust this agency and its research wing with technology crafted to read their minds?