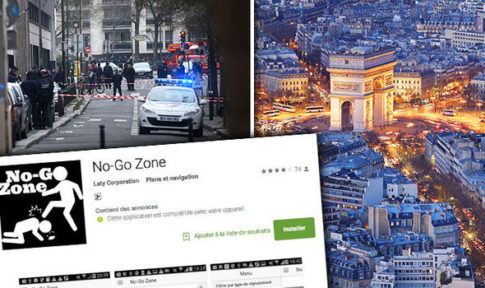 PARISIANS worried about their safety in the French capital can now download an app that allows them to report, locate and avoid “hazardous locations”, as the country’s terror level remains at its highest.

The ‘No-Go Zone’ app allows users to share instances of “aggression, theft, harassment or incivility” at any location in the city, and mark them on a public map.

Other app users will then be able to view the entries and incidents, keeping them informed of what is going on around them.

The app’s description states: “Whether you are staying in an unknown location, looking for a safe place to live, on your way to a specific location, or for whatever reason, No-Go Zone allows you to reduce any risk of aggression, theft, harassment or incivility.”

The app’s release coincided with an increase in complaints from Parisian women who say they face constant harassment from migrants in certain parts of the city.

Women in the east Paris district of Chapelle-Pajol also claim they cannot leave their homes without receiving verbal abuse from migrants and drug dealers who have flooded to the area.

Reviews for the app – which has been downloaded at least 5,000 times – are mostly positive, with many users citing it as “essential”.