– It Begins: WalMart Warns Truckers It Will No Longer Work With Them If They Move Goods For Amazon:

In a note this morning from Deutsche Bank’s freight and logistics analyst Amit Mehrotra, he notes that  the “WMT vs. AMZN battle is heating up” and points to a report by DV Velocity, according to which a well respected transportation industry consultant told attendees of a logistics conference that Walmart (WMT) is telling trucking companies that it will no longer do business with them if they continue moving goods for Amazon (AMZN).

The news, while suggestive perhaps of Walmart’s growing desperation in its war with the retail juggernaut that is Amazon, has dramatic implications not only for the future of retail (and associated prices) but for one of the most important US industries: trucking, and the number of people it employes.

According to Deutsche, these developments, “are likely to have significant implications for U.S. transportation companies, in our view, as Amazon and Walmart remain two of the largest users of truckload capacity. For reference Walmart represents about 14% of SWFT’s operating revenues and traditional retail accounts for about half of WERN’s total sales (WMT around 4%).”

A map of Amazon’s multiplying fulfuillment centers is shown below. 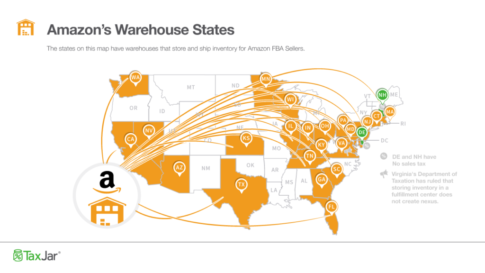 And, as CNBC reported last week, WalMart warned some tech companies that if they want Wal-Mart’s business, they can’t run applications on Amazon’s cloud platform, Amazon Web Services, some tech companies told The Wall Street Journal. Wal-Mart uses some tech vendors’ cloud apps that run on AWS, Wal-Mart spokesman Dan Toporek told the Journal, though he declined to say which apps or how many. But Toporek did acknowledge instances where Wal-Mart is pushing for AWS alternatives, the Journal reported Wednesday.

Wal-Mart spokesman Toporek told CNBC in an email: “Our vendors have the choice of using any cloud provider that meets their needs and their customers’ needs. It shouldn’t be a big surprise that there are cases in which we’d prefer our most sensitive data isn’t sitting on a competitor’s platform.” Wal-Mart doesn’t appear to be alone in this push to leave AWS, either.

Other large retailers are reportedly requesting that service providers move away from AWS, the Journal said, citing technology vendors that work with retailers. Adding to the many growing conflicts of interest, Amazon has confirmed a number of retailers it competes with use AWS, for example GameStop.

The battle between Wal-Mart and Amazon is only heating up, after Amazon announced plans last week to acquire brick-and-mortar grocery retailer Whole Foods. With Amazon stepping into Wal-Mart’s turf in grocery, Wal-Mart has been trying to beef up its e-commerce presence.

In light of AMZN’s recent expansion with the purchase of WFM, one can see why WMT is starting to take it much more seriously. Perhaps Amazon’s latest push (and WMT’s lobbying effort) may explain why Trump decided to finally reignite his long-simmering war with AMZN CEO Jeff Bezos, when this morning he tweeted “The #AmazonWashingtonPost, sometimes referred to as the guardian of Amazon not paying internet taxes (which they should) is FAKE NEWS!”

The #AmazonWashingtonPost, sometimes referred to as the guardian of Amazon not paying internet taxes (which they should) is FAKE NEWS!