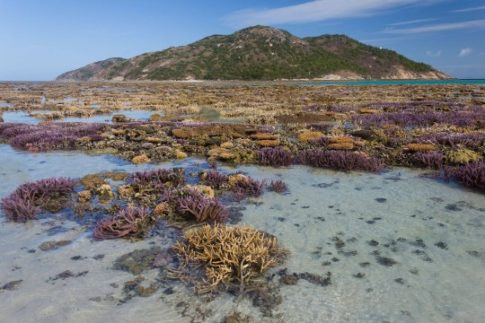 It is puzzling why the recent 2017 publication in Nature, Global Warming And Recurrent Mass Bleaching Of Corals by Hughes et al. ignored the most critical factor affecting the 2016 severe bleaching along the northern Great Barrier Reef – the regional fall in sea level amplified by El Niño. Instead Hughes 2017 suggested the extensive bleaching was due to increased water temperatures induced by CO2 warming.

In contrast in Coral Mortality Induced by the 2015–2016 El-Nin?o in Indonesia: The Effect Of Rapid Sea Level Fall by Ampou 2017, Indonesian biologists had reported that a drop in sea level had bleached the upper 15 cm of the reefs before temperatures had reached NOAA’s Coral Reef Watch bleaching thresholds. As discussed by Ampou 2017, the drop in sea level had likely been experienced throughout much of the Coral Triangle including the northern Great Barrier Reef (GBR), and then accelerated during the El Niño. They speculated sea level fall also contributed to the bleaching during the 1998 El Niño. Consistent with the effects of sea level fall, other researchers reported bleaching in the GBR was greatest near the surface then declined rapidly with depth. Indeed if falling sea level was the main diver in 2016’s reef mortalities, and this can be tested, then most catastrophic assertions made by Hughes 2017 would be invalid.

Indeed the Great Barrier Reef had also experienced falling sea levels similar to those experienced by Indonesian reefs.  Visitors to Lizard Island had reported more extreme low tides and more exposed reefs as revealed in the photograph above, which is consistent with the extremely high mortality in the Lizard Island region during the 2016 El Niño. Of course reefs are often exposed to the air at low tide, but manage to survive if the exposure is short or during the night. However as seen in tide gauge data from Cairns just south of Lizard Island, since 2010 the average low tide had dropped by ~10 to 15 cm.  After previous decades of increasing sea level had permitted vertical coral growth and colonization of newly submerged coastline, that new growth was now being left high and dry during low tide. As a result shallow coral were increasingly vulnerable to deadly desiccation during more extreme sea level drops when warm waters slosh toward the Americas during an El Niño.