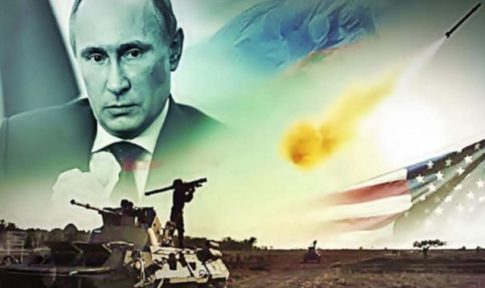 – World On The Precipice As Russia Threatens To Shoot Down U.S. Jets, U.S. Refuses To Back Down:

The world is now perhaps closer to World War Three than it has been in five decades as the situation in Syria is heating up yet again. In less than 24 hours, the United States has attacked the Syrian military, Iran has launched missiles into Syria, Russia is threatening to shoot down American planes, and the United States is digging in its heels and threatening to continue to provoke both the Russians and the Syrians.

While that about sums up the current micro-version of the situation, it’s important to get a rundown of just what led up to the precipice we are all standing on.

As heavy fighting took place in West Raqqa between the Syrian military, ISIS, and the SDF (Syria Democratic Forces), a U.S.-backed fighting group that contains elements of jihadists, Kurdish militants, and Kurdish jihadists, the Syrian military conducted a bombing raid near the SDF forces. It is important to note that the SAA claims it was primarily fighting ISIS.

In response, the United States engaged the Syrian fighter jet, shooting it down in what is the first U.S. shoot-down of a Syrian jet in history and the first shoot-down by the United States in almost twenty years. Whether or not the pilot survived and his location if he did is not yet known for certain although the Syrian military is currently engaged in an operation to rescue him. The United States claimed that it attempted to call of the Syrian jet by contacted Russia via its communication channel but received no answer on the Russian end. Russia claims that no contact was attempted by the U.S.

A US-led coalition fighter jet has shot down a Syrian military plane in Raqqa province, the US has confirmed.

The SU-22 fighter bomber was engaged by an F/A-18E Super Hornet after it had dropped bombs near the US-backed Syrian Democratic Forces, the Pentagon said.

It is the first time in the Syrian conflict that the US-led coalition has shot down a Syrian jet.

Syria condemned what it called a “flagrant attack” that would have “dangerous repercussions”.

The downing of a Syrian warplane by a US jet threatens to draw Washington further into the Syrian fighting.

The US has already attacked pro-government forces on the ground after they entered an exclusion zone designed to protect US personnel training and advising anti-government rebels near Syria’s border with Iraq.

Now, Washington is extending this protection to forces that it backs who are engaged in the offensive against Raqqa. These local, tactical steps inevitably could have strategic implications creating a further source of friction between Washington and Tehran.

The Pentagon said that pro-government militiamen had attacked SDF units, driving them from the town of Ja’Din.

The pro-government forces are not fighting the battle for Raqqa but they have been making ground against IS in the surrounding area, south-west of the city.

The US-led coalition conducted what the Pentagon said was a “show of force” – a reported buzzing of the pro-government troops by jets – to stop the attack and then called the Syrian government’s ally, Russia, to try to “de-escalate the situation and stop the firing”.
. . . . .

However, the SU-22 dropped bombs on SDF positions a few hours later, the Pentagon said, and “in accordance with rules of engagement and in collective self-defence of Coalition-partnered forces [the plane] was immediately shot down”.

Attempts to warn the plane away using an emergency radio frequency failed, the US Central Command said.

The Pentagon statement added: “The demonstrated hostile intent and actions of pro-regime forces toward Coalition and partner forces in Syria conducting legitimate counter-Isis [IS] operations will not be tolerated.”

The coalition, it added, did “not seek to fight the Syrian regime, Russian or pro-regime forces partnered with them, but will not hesitate to defend coalition or partner forces from any threat”.

Nevertheless, after the downing of the Syrian jet, Iran launched a series of missiles from Iran into Syria against ISIS targets, both a show of force and resolve by the Iranians and as a response to the ISIS (read Western) terrorist attack on the Iranian parliament.

Shortly after the missiles fell, Russian officials condemned the American attack and announced that Russia is suspending the “communications channel” established with the United States designed to avoid such types of incidents between the United States and Russia. Even more important, however, is the fact that Russia has officially announced that it will consider any air activity west of the Euphrates as potential targets for shoot-down. This includes U.S. jets and, presumably, Israeli jets.

The Russian Defense Ministry blasted the U.S.’s shooting down of a Syrian fighter jet as a “massive violation of international law” and said it will begin treating U.S.-led coalition jets flying west of the Euphrates River in Syria as targets.

“Repeated combat actions by U.S. aviation under the cover of counterterrorism against lawful armed forces of a country that is a member of the U.N. are a massive violation of international law and de facto a military aggression against the Syrian Arab Republic,” the Russian Defense Ministry said.

The ministry warned that any U.S.-led coalition aircraft flying west of the Euphrates “will be tracked by the Russian ground and air anti-aircraft defense systems as air targets in the areas where Russian aviation is on combat missions in the Syrian sky.”

But, despite the gravity of the situation, the United States is digging in its heels and reiterating its belief that it has the right to strike and occupy any country in the world and to do so with impunity.

“We do not seek conflict with any party in Syria other than ISIS, but we will not hesitate to defend ourselves or our partners if threatened,” Capt. Jeff Davis told Fox News.

Chairman of the Joint Chiefs of Staff Gen. Joseph Dunford doubled down on that rhetoric during a Monday speech at the National Press Club.

“As a result of recent encounters involving pro-Syrian Regime and Russian forces, we have taken prudent measures to re-position aircraft over Syria so as to continue targeting ISIS forces while ensuring the safety of our aircrew given known threats in the battlespace,” Rankine-Galloway said in a statement.

To make matters more intense, the Syrian military is now clearly engaged in combat with SDF fighters in West Raqqa as the SAA is attempting to rescue their pilot. Al-Masdar News writes,

Intense clashes have broken out between the Syrian Arab Army (SAA) and US-backed Syrian Democratic Forces (SDF) in the western countryside of Al-Raqqa, tonight, a military source informed Al-Masdar.

According to the source, units from the Syrian Arab Army attempted to cross SDF front-lines in order to rescue their fallen pilot; however, they were turned away by the latter.

This resulted in a fierce confrontation that is currently ongoing between the two entities near the key town of Resafa in western Al-Raqqa.

Thus, this provides a prime situation in which the U.S. may decide to conduct a strike against Syrian military forces or otherwise invade the airspace designated by Russia as off-limits, calling Russia’s bluff in regards to its threats. In the past, this has been a terrible move since there is a tradition in Russia’s foreign policy and diplomatic culture to only make threats when it is prepared to back them up and only make agreements it intends to honor.

At this point, the only sensible solution for the United States is complete and unequivocal withdrawal from Syria. This is no longer a moral question. It is quite possibly a question of survival.