Earlier in the morning workers near Purex had noticed a 4-foot-by-4-foot depression that was 2 to 4 feet deep over the tunnel.

Workers in Purex were evacuated when the depression was noticed.

About 3,000 workers in central Hanford initially were told to take shelter indoors, including about 1,000 workers at the vitrification plant construction site. Ventilation systems at the vit plant have been turned off as part of the emergency procedure and equipment that could generate heat have powered down.

The DOE announced that secretary Perry is aware of the incident and that there is no initial indication of any worker exposure or an airborne radiological release.

Meanwhile, Private pilots in the area have been told to avoid flying over Hanford. The Hanford Patrol is working with the Federal Aviation Administration to put a formal air restriction in place until the FAA can confirm there is no danger.

Update 1: A robot is being used to sample the contaminated air and soil in the area around the collapse…

This robot is being used at Hanford right now to sample contamination in the air and on the ground. pic.twitter.com/AFOrhIbB9S

And here is a chart of current windflows… 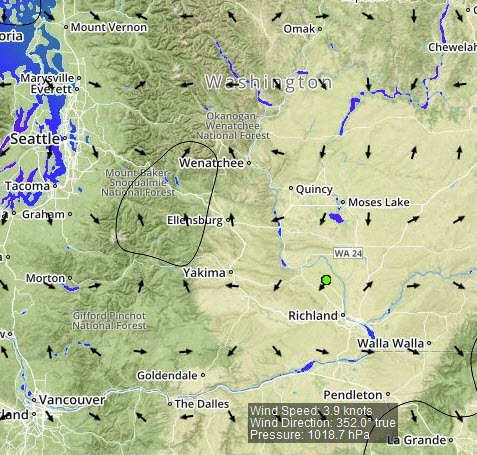 As we detailed earlier, the U.S. Department of Energy activated the Emergency Operations Center Tuesday due to a tunnel collapse at the Hanford nuclear site.