The Fed likes to brag about the “We saved the world” recovery.

However, the unfortunate truth of the matter is a record Half of American Families Live Paycheck to Paycheck.

Does it Matter? Let’s investigate.

Unprepared for Nearly Anything 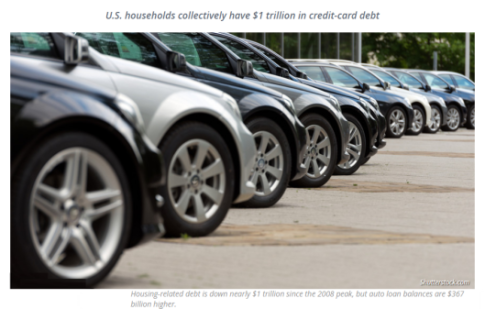 A Fed study shows U.S. Households Will Soon Have as Much Debt as They had in 2008.

The Federal Reserve announced Friday that the U.S. has $1 trillion in credit-card debt. Consumers hit that number in the fourth quarter of 2016, but eased on revolving credit during January 2017. The Fed announcement showed revolving consumer credit hit more than $1 trillion once again in February 2017.

“Credit card debt is rising quickly, but delinquencies are still really low,” said Matt Schulz, a senior industry analyst at the credit cards site CreditCards.com. “Many Americans are doing a good job of controlling their debts, but eventually with big debts and rising interest rates, it’s likely that something will have to give.”

Excuse me for asking but if half the nation lives paycheck to paycheck, is that really indicative of doing a good job at managing debt.

And as for “low delinquencies”, I remind you of my April 26 article Subprime Credit Card Losses Bite Capital One: Income Down 20%, Charge-Offs Up 30%.

Nonetheless, I remind you of an important perception.

We Saved the World

Two Reasons Not to Worry

The real crux of the matter is point number two.

The Fed does not give a damn about the bottom half of the economy even though it spouts continual lies about “income inequality.

The Bottom 50% Do Not Matter

As long as the Fed can keep stocks and home prices elevated, there is no concern about the food-stamp, rent-subsidized, Medicaid-supplement, disability-income, Obamacare-subsidized 50% of Americans struggling paycheck-to-paycheck.

That money rolls in guaranteed, month after month!

That 50% cannot afford a house is irrelevant as long as suckers keep paying $500,000 to two-bedroom shacks in LA.

The game is to keep asset prices up so that the top 50% keep spending. The bottom 50% are taken care of by government (taxpayer) subsidies noted above.

The Fed needs to keep asset prices elevated even though it’s pretty clear concerns are mounting over bubbles.

Can the Fed save the world again?

That statement is a bit over the top. By how much I don’t know. But the trend is clear, as is the fly in the ointment.

Brexit was the first warning shot. Trump was the second.

As soon as the bottom 65% don’t matter, those 65% may vote to take matters into their own hands.