Tens of thousands of Canadian clients of Shaw are suffering what appears to be a nationwide loss of internet, cable and phone services. According to the outage map below, the service interruption is widespread and has impacted most Canadian metropolitan centers. 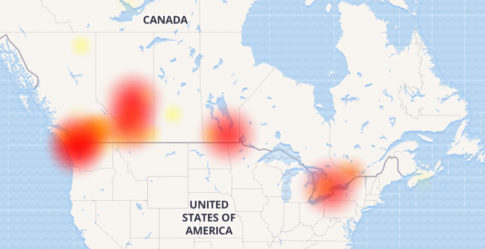 Shortly before 4pm ET, the telecom company posted to its website advising that an outage was in progress and pologizing:

“Some customers nationally may be experiencing an interruption to Internet, Television and Home Phone services. We are investigating the situation and working to restore service as quickly as possible. We apologize for any inconvenience this may cause.”

At 4:20 ET they issued an update, saying they don’t know when services will be restored.

“Our network technicians are working to restore services as quickly as possible. Currently no ETA. If we get any further information to share we will post another update. Thank you for your patience so far.”

At 4:50 ET Shaw updated that its broadband team is still working to resolve service.

For more information on the service interruptions, see https://t.co/IXd2pPOkBJ

Shaw customers across the country were not impressed, as can be seen by the thousands of angry tweets.

Well, with the #shaw outage we’ve been knocked off our normal routine. Tweet us what your business is and we’ll share with our audience!

With this #shawoutage I can’t work, I can’t shop (cash only), and I can’t even play my video game. I’mma have to play with my kids.

Well at least i know i dont have to blame Teksavvy for the #Shaw outage. Nationwide. @Shawhelp please fix or at least tweet an update