– There Will Be Blood: Left Prepares For War After Berkeley Beat Down: “Combat Training, Better Equipment, Guns…”:

This prompted a reddit discussion among the left’s tolerant resistance movement, with many asking how they can more effectively go to war against anyone who disagrees with their social, political, and economic views.

The anti-Trump protesters at the rally were ill-prepared for what they came to Berkeley to confront and now they are trying to figure out ways to ensure it doesn’t happen again. 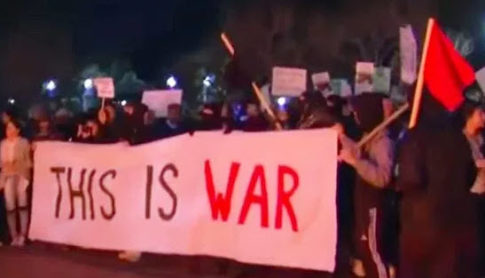 In short, as predicted, they are turning to militancy and mob action by mobilizing individuals and groups to attend combat training seminars, acquiring better equipment like baseball bats and helmets, and of course, if things really go bad… guns.

Yes, we seemed to have lost today. The alt-right held their ground. If we wanna take action against them, we need to be better organized and better trained. It doesn’t help that it’s only the far left opposing them, any trump supporter can be radicalized far easier than any liberal.
I hope we learn from today
…
A shocking number of our comrades went in there with absolute no combat training. We need to set up seminars or something of the sort.
…
We also need better equipment, I know the bandanna and hoodie look is our trade mark, but I saw the right wearing motorcycle helmets, and baseball helmets. A dude wearing a helmet is going to keep going if he get punched, our guys are going down. 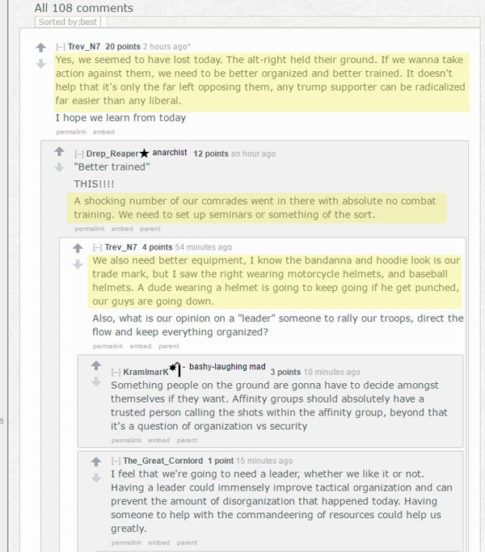 And though they are, always have been and always will be “tolerant” and “peaceful protesters,” many are now discussing arming themselves so they can go head to head with the “fascist” and “racist” alt-right.

I honestly think we need a campaign to get more antifa armed. It seems that seems to be the biggest problem with our resistance. They’re mostly armed, why aren’t we?

Not getting disarmed is a big part of the problem, yes, but we need more than flags and bats. We need to take notes from the John Brown Gun Club and get firearms and training. I know getting firearms in states and cities we have a presence in is usually a hassle, but even handguns would help. It would certainly put a psychological element in while holding fash back. Who do you think a fascist is more afraid of? People with only flags and bats, or people with flags, bats, and guns? 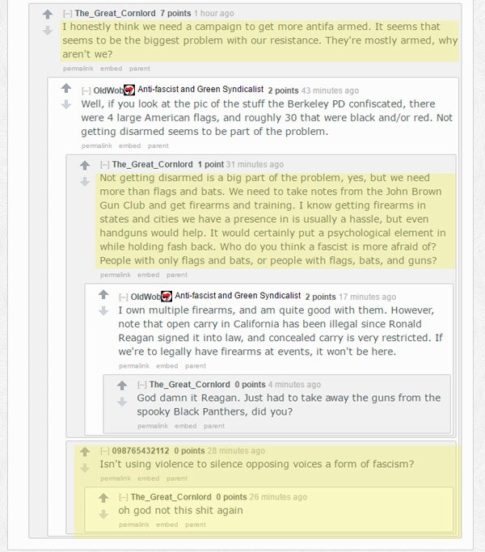 The “comrades” organizing against “fascists,” which basically means anyone and everyone who voted for President Trump, are quickly coming to the conclusion that to win this conflict they will need to be armed with more than just flags, banners, chants and pepper spray.

Apparently, there is a realization among the left that whatever it is they are trying to accomplish will not come with peaceful assembly, but rather, with blood in the streets.

As we and others like Brandon Smith of Alt-Market previously warned, the Left WILL Resort To Large Scale Violence… To Stop Fascism:

I believed at that time that the social-justice cult would lose mainstream influence but that the existing minority would resort to even more insidious tactics and greater violence to get what they want; and, the so-called “moderate left” would cheer them on.  As it turns out, I have been proven right so far.

Not that extreme Leftists have been averse to violence over the past year, but I think it is safe to say that the volume on the cultural Marxist machine has been turned up a notch.

The social justice mantra is changing. At first, it was predominately about forming mobs to “shame” target political opponents into silence. Now, it is about forming mobs to do what they call “punching Nazis.” Leftists are now often seen regurgitating the claim — “This is only the beginning…”

Indeed, this is only the beginning.

Ladies and Gentlemen, if you have a Trump bumper sticker, an American flag or a Gadsden decal on your vehicle, prepare to defend yourselves.

There will be war.