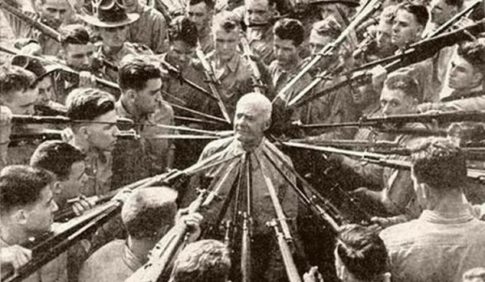 It’s not a story that’s likely to appear on the evening news, but it certainly should.

Deutsche Bank has announced that it will create more shares, selling them at a 35% discount. Existing shareholders have not been pleased and, in the first four days since the offer was announced, the value of existing shares dropped by 13% as shareholders began dumping them.

So why on earth would Germany’s foremost bank do something so rash? Well, in recent years, the bank has been involved in many arbitrations, litigations, and regulatory proceedings as a result of fraudulent activities, including the manipulation of markets. Having been found guilty, they presently owe $7.2 billion to the US Department of Justice and are now facing an additional $10 billion litigation bill. Unfortunately, the bank is already broke and, should Deutsche actually be able to sell the new shares, the $8.6 billion they hope to receive will still not save them from bankruptcy.

Business has also not been so good. They’ve lost nearly $2 billion in the last two years, instituted a hiring freeze, cut bonuses by 80%, and are facing a $2.5 million civil penalty to pay to the Commodity Futures Trading Commission for failure to report transactions and, not surprisingly, have been downgraded.

The German government has stated that they will not bail out Deutsche and, indeed, under the EU agreement, they cannot do so. It’s safe to say that Germany’s largest bank will soon go the way of the dodo.

For those who don’t live in Europe, this may not seem all that significant. However, Deutsche is the bank that funds the euro system, which they can now no longer do. Further, Deutsche is ten times larger than Lehman Brothers, an American bank that famously went down in 2008, heralding in that year’s economic crash. (Ninety percent of Deutsche’s revenue has been from derivative trading, which is what brought down Lehman.)

Upon the collapse of Deutsche Bank, four major US banks would be expected to become insolvent in a matter of days. The ripples would then continue to spread outward into the economic system as a whole.

Now for the Bad News

For many years, I’ve made repeated reference to the fact that the Western powers have been headed south economically, repeatedly relying on strategies that would provide short-term gain but would ultimately create long-term pain. They’ve been remarkably consistent and steadfast in this trend and, at this point, Deutsche is merely the latest trigger that may bring down the system. The other potential triggers are as serious as they are diverse.

These are just a few select high points, and there are quite a few other triggers out there, any of which, if pulled, would serve to collapse the economy very quickly. And the list keeps growing.

The question is not “if” but “when.” In the end, it will matter little which trigger it will be, as, like a string of firecrackers, when one explodes, a chain reaction is set off. Therefore, anyone who is dependent in a significant way upon the government, financial institutions, and/or markets of any of the major Western powers is likely to understandably feel like the fellow in the photo above.