Amid attempts to “clarify areas of sharp difference,” Russian Foreign Minister Sergei Lavrov blasted the Trump administration’s “ambiguous and contradictory” foreign policy at the start of talks with Tillerson in Moscow Wednesday calling the demand for the Kremlin to abandon Assad “absurd.” Furthermore, he warned Tillerson that Russia “believes it’s fundamentally important not to let these actions happen again.” 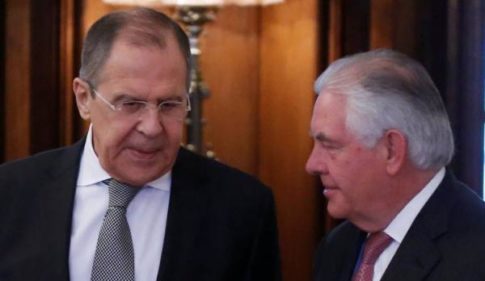 Russia pushed back against demands that it abandon Syrian leader Bashar al-Assad over a chemical-weapons attack as Bloomberg reports that the Kremlin said President Vladimir Putin is likely to meet with U.S. Secretary of State Rex Tillerson.

Putin complained that relations with the U.S. are worse than under President Barack Obama, while Foreign Minister Sergei Lavrov criticized the Trump administration’s “ambiguous and contradictory” foreign policy at the start of talks with Tillerson in Moscow Wednesday.

Trust between Russia and the U.S. under Trump “at the working level, especially at the military level, hasn’t improved; rather it’s deteriorated,” Putin said, according to a Kremlin transcript published Wednesday of an interview with the Mir TV channel.

There’s a “probability” that Putin and Tillerson will meet if the talks between the two top diplomats show a need to “report to the head of state,” Kremlin spokesman Dmitry Peskov told reporters on a conference call. It’s “quite absurd” to demand that Russia abandon Assad as this would mean ending support for his forces that are fighting against Islamic State and other terrorist groups in Syria, Peskov said.In remarks before a closed-door session,

Mr. Lavrov described the U.S. missile attack last week on a Syrian air base? as “an unlawful attack against Syria,” adding:

“We believe it’s fundamentally important not to let these actions happen again.”

?It was unclear whether Mr. Lavrov was referring to the U.S. strike on Friday or to what Russia says were rebel stockpiles of chemical weapons that were hit by Syrian government aircraft several days earlier in a town in Idlib province, killing at least 85 people and exposing hundreds of others to a toxic gas.

The Moscow meeting will “further clarify areas of sharp difference so that we can better understand why these differences exist and what prospects for narrowing those differences may be,” Tillerson told Lavrov.

“Putin has built his reputation on never conceding to any public pressure,” said Gleb Kuznetsov, a political expert and consultant to the Kremlin on domestic policies. “An ultimatum will lead to Putin strengthening his support for Assad and this will intensify the Syrian conflict, turning it into a conflict between the West and Russia.”