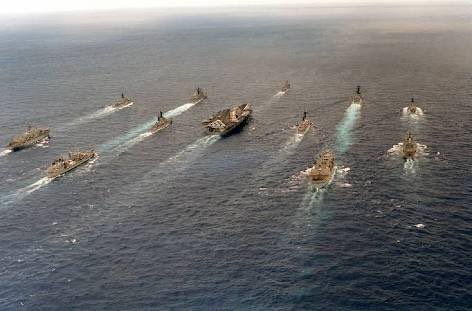 – North Korea Threatens U.S. With Nuclear Attack At Any Sign Of Pre-Emptive Strike:

With the USS Carl Vinson carrier group steaming toward the Korean peninsula for what some speculate may be to launch a “decapitation” strike on the Kim Jong-Un regime, on Tuesday North Korean state media warned of a nuclear attack on the United States at any sign of a U.S. pre-emptive strike.

North Korea’s official Rodong Sinmun newspaper said the country was prepared to respond to any aggression by the United States. “Our revolutionary strong army is keenly watching every move by enemy elements with our nuclear sight focused on the U.S. invasionary bases not only in South Korea and the Pacific operation theatre but also in the U.S. mainland,” it said.The North’s foreign ministry, in a statement carried by its KCNA news agency, said the U.S. navy strike group’s approach showed America’s “reckless moves for invading had reached a serious phase”.

“We never beg for peace but we will take the toughest counteraction against the provocateurs in order to defend ourselves by powerful force of arms and keep to the road chosen by ourselves,” an unidentified ministry spokesman said.

Tensions escalated sharply over the past week on the Korean peninsula with talk of imminent military action by the United States gaining traction following its strikes last week against Syria and amid concerns the reclusive North may soon conduct a sixth nuclear test.

The North also convened a Supreme People’s Assembly session on Tuesday, one of its twice-yearly sessions in which major appointments are announced and national policy goals are formally approved. Delegates from around the North have been arriving in Pyongyang ahead of the assembly session. They visited statues of previous leaders Kim Il Sung and his son, Kim Jong Il, state media reported.

Saturday is the 105th anniversary of the birth of Kim Il Sung, the country’s founding father and grandfather of current ruler, Kim Jong Un. A military parade is expected in the North’s capital, Pyongyang, to mark the day. North Korea often also marks important anniversaries with tests of its nuclear or missile capabilities in breach of U.N. Security Council resolutions.

According to Reuters, Syrian President Bashar al-Assad sent a message of congratulations to mark the event, lambasting “big powers” for their “expansionist” policy.

“The friendly two countries are celebrating this anniversary and, at the same time, conducting a war against big powers’ wild ambition to subject all countries to their expansionist and dominationist policy and deprive them of their rights to self-determination,” Russian news agency Tass quote the message as saying.

North Korea and the rich, democratic South are technically still at war because their 1950-53 conflict ended in a truce, not a peace treaty. The North regularly threatens to destroy the South and its main ally, the United States.

Meanwhile, a few hundred kilometers to the south, South Korean acting President Hwang Kyo-ahn warned of “greater provocations” by North Korea and ordered the military to intensify monitoring and to ensure close communication with the United States. “It is possible the North may wage greater provocations such as a nuclear test timed with various anniversaries including the Suprme People’s Assembly,” said Hwang, acting leader since former president Park Geun-hye was removed amid a graft scandal.

South Korean officials also took pains to quell talk in social media of an impending security crisis or outbreak of war. “We’d like to ask precaution so as not to get blinded by exaggerated assessment about the security situation on the Korean peninsula,” Defence Ministry spokesman Moon Sang-kyun said.

On Monday, the Chosun South Korean newspaper reported that some 150,000 Chinese troops had been deployed to the Chinese border to “prepare for unforeseen circumstances” such as the prospect of “military options.”

Alongside Syria, North Korea has emerged as one of the most pressing foreign policy problems facing the administration of U.S. President Donald Trump. It has conducted five nuclear tests, two of them last year, and is working to develop nuclear-tipped missiles that can reach the United States. The Trump administration is reviewing its policy towards North Korea and has said all options are on the table, including military strikes, but U.S. officials said non-military action appears to be at the top of the list if any action were to be taken.

Speaking on the topic of US policy vis-a-vis NK, Russia’s foreign ministry, in a statement ahead of a visit by U.S. Secretary of State Rex Tillerson, said it was concerned about many aspects of U.S. foreign policy, and particularly concerned about North Korea.

“We are really worried about what Washington has in mind for North Korea after it hinted at the possibility of a unilateral military scenario,” a statement said. “It’s important to understand how that would tally with collective obligations on de-nuclearising the Korean peninsula, something that is underpinned in U.N. Security Council resolutions.”

As a reminder, last week the U.S. Navy strike group Carl Vinson was diverted from planned port calls to Australia and would move towards the western Pacific Ocean near the Korean peninsula as a show of force. That said, those expecting an imminent strikes by the US on North Korea may have to wait: U.S. officials said it would still take the strike group more than a week to arrive near the Korean peninsula.

And then there is China.

According to Reuters, China and South Korea agreed on Monday to impose tougher sanctions on North Korea if it carried out nuclear or long-range missile tests, a senior official in Seoul said. On Tuesday, a fleet of North Korean cargo ships was heading home to the port of Nampo, the majority of it fully laden, after China ordered its trading companies to return coal from the isolated state to curb coal traffic, sources with direct knowledge of the trade said.

The order was given on April 7, just as Trump and Xi were set for the summit where the two agreed the North Korean nuclear advances had reached a “very serious stage”, Tillerson said. As we reported at the end of February, China joined western nations in further isolating the Kim regime when banned all imports of North Korean coal on Feb. 26, cutting off the country’s most important export product.

As well as the anniversary of Kim Il Sung’s birth, there are several other North Korean anniversaries in April that could be opportunities for weapon tests, South Korean officials have said.

As reported two weeks ago, satellite imagery from 38 North has shown that North Korea is seen ready to conduct its sixth nuclear test at any time, with movements detected by satellite at its Punggye-ri nuclear test site. Should Kim do that as the US carrier is in proximity, it will likely be the last thing he ever does.