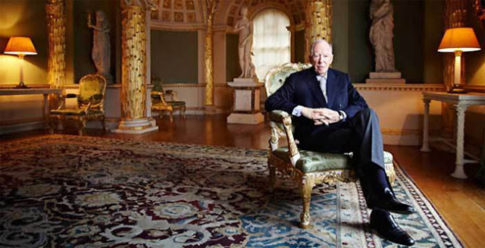 – Jacob Rothschild: US Has Allies Among Russian Elites:

80-year-old member of the Rothschild dynasty, Jacob Rothschild is confident that the United States can find support in some of the Russian elites, he said on American political TV show.

“The current crisis may last much less time than the cold war. At the moment the US has allies among the Russian elites, who are ready to take over the initiative. In this scenario, ordinary people will not notice anything. The course of Russia’s foreign policy will change – this will be presented as some kind of achievement of Russian diplomacy,” – said Rothschild.

Meanwhile Rothschild is sure that the so-called conflict of the Russian elites is in the final stage.

“A part of Russian elite insists that the Russian leadership pushes for the lifting of sanctions. Part are against concessions to the West. Next year we’ll know who won,” – said Rothschild.

It is worth noting that since September 30, 2016, a video of the famous Donbass defender Igor Girkin (Strelkov) lashing out at Putin has been circulating online. Strelkov makes it clear that his followers are ready to protest, and did not shy from personal insults towards Putin.

Earlier those Russian experts who favor Putin dubbed Strelkov “the fifth column”. Who is Strelkov’s sponsor remains a mystery.

Every country has its patriots and traitors, and it’s no doubt that Rothschild is not exaggerating. He seems very well informed for a government outsider. Strelkov is the least of Putin’s worries. The tentacles of the sprout reach far and wide and there is no doubt America has its ‘allies’ deeply planted in every strategic sector of the Russian society. But so they did in the 90’s but it did not prevent an emergence of a new strong and defiant leader seemingly out of nowhere. Undoubtedly America succeeded in enslaving much of the world, but Russia is no stranger to such attempts. Whenever Russia was plunged into dark times it has found its way out.

Apparently for America a victory means complete defeat and surrender of the opponent, which is consistent with it’s adherence to the law of the jungle in international politics. It has worked so far as long as 95% of global population are content with the status quo. However everyone understands that sharing a pie is better than giving it all to one, and global leaders and their constituents are watching Putin’s moves with envy and anticipation. In that regard we can safely conclude that Putin himself has many more silent allies among global elites than he is even aware of.