A whisper from the past …

“From now on bombs will be retaliated with bombs.”
– Adolf Hitler 1939

In a surprising statement by White House spokesman Sean Spicer, Donald Trump is allegedly open to authorizing additional strikes on Syria if its government uses something as mundane as barrel bombs in the country, a weapon that has seen constant use during the 6 year Syrian civil war.

Yesterday, when discussing what the precursor for future US air strike on Syria could be, we said “expect to hear much more about white phosphorus in the coming days: it will be the “catalyst” for the next round of Syrian airstrikes.” In retrospect, we may have been aiming too high.

In the latest apparent shift of the White House’s official stated position on what could draw a U.S. military response in the Syrian conflict, on Monday afternoon press secretary Sean Spicer warned that the use of either chemical weapons or the use of barrel bombs on civilians could draw fire, literally, from the Trump administration. Here is the exchange in question:

SPICER: I think the president has been very clear that there are a number of lines that were crossed last week. He’s not going to sit down — you saw this with the last administration, they drew these red lines, and then the red lines were run over. … The answer is that if you gas a baby, if you put a barrel bomb into innocent people, I think you will see a response from this president. That is unacceptable.

While the future use of chemical weapons or incendiary bombs and/or white phosphorus for that matter, would surely warrant further escalation in the eyes of the administration whether such attacks were legitimate or “false flagged” – these are effectively banned ordinances – the fact that the White House considers barrell bombs a catalyst for escalation is surprising. The reason for that is that  barrell bombs, or oil drums or cylinders packed with explosives and shrapnel, are among the most common form of weapons used by both sides in the Syrian civil/proxy war. 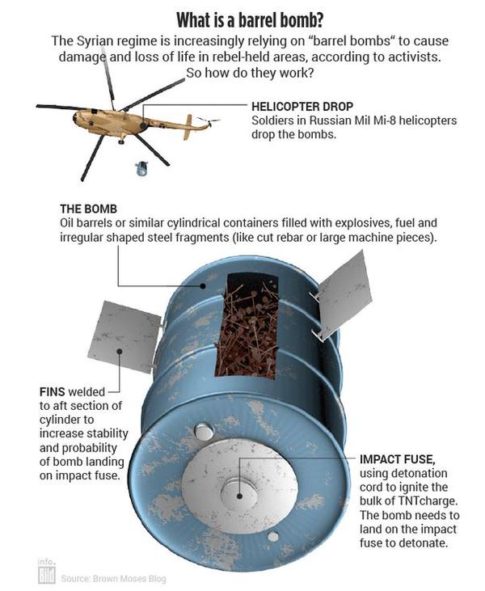 According to the Syrian Network for Human Rights watchdog, some 13,000 barrel bombs were dropped in the country in 2016, killing hundreds of people. The bombs are seen as targeting civilians because they hit an indiscriminate area. But the punchline is that if Trump’s new policy is indeed to respond by bombing Assad every time there’s a barrel bomb attack that kills civilians, then the US will have no choice but to bomb Assad every single day, in other words engage in all out war, whether it calls it that or not.

What is further surprising is that this policy appears at odds with everything else the administration has said: all officials, including Spicer, have suggested the US doesn’t intend to topple Assad by force, and yet by lowering the bar so low, it assures that the US will be engaged in daily combat against Syria, and by implication, Russia which has shown no sign it will reduce its support for Assad.

One simple explanation for this divergence is that Spicer doesn’t know what a barrel bomb is, and instead meant to say incendiary, or phosphorus, bombs.

On the other hand, if what Spicer said is true, then Trump has been palced in an awkward place, with his own press secretary declaring the use of a barrel bomb as the latest “red line”, the kind of bomb Assad is almost certain to use in forthcoming attacks against rebels.

Suggesting that the explanation is likely the former, according to Reuters, Spicer later said his mention of barrel bombs as a potential trigger for further action by the United States did not reflect a change in position.

“Nothing has changed in our posture,” he said by email. “The president retains the option to act in Syria against the Assad regime whenever it is in the national interest, as was determined following that government’s use of chemical weapons against its own citizens. And as the president has repeatedly made clear, he will not be telegraphing his military responses.”

And even that answer was inconclusive, which means that merely further reports of bombing by Assad could be sufficient to launch a second air strike against the Syrian regime. If that is the case, and if yesterday’s report that Russia and Iran would “respond with force” if Syria is attacked again is accurate, then the recent normalization in geopolitical tensions will be very short-lived.

Finally, just to keep the drums of war beating not just for Syria, but Russia as well, AP reported that according to a senior US official the US has “concluded Russia knew in advance of Syria’s chemical weapons attack last week, a senior U.S. official said Monday.”

How did it make that conclusion? Because “a drone operated by Russians was flying over a hospital as victims of the attack were rushing to get treatment. Hours after the drone left, a Russian-made fighter jet bombed the hospital in what American officials believe was an attempt to cover up the usage of chemical weapons.”

And while the senior official said the U.S. has no proof of Russian involvement in the actual chemical attack in northern Syria, he added that “the presence of the surveillance drone over the hospital couldn’t have been a coincidence, and that Russia must have known the chemical weapons attack was coming and that victims were seeking treatment.”

And that’s all the “evidence” the US media needs to take the narrative that Russia was complicit in Assad’s chemical attack and make it part of tomorrow’s news cycle, a news cycle which since Trump’s launch of air strikes on Syria is oddly devoid of any stories in the NYT or WaPo detailing how Donald Trump has been operating on behalf of the Kremlin…

9 thoughts on “White House Reveals A New “Red Line”: Assad’s Use Of Barrell Bombs Could Lead To More Strikes – #WW3”