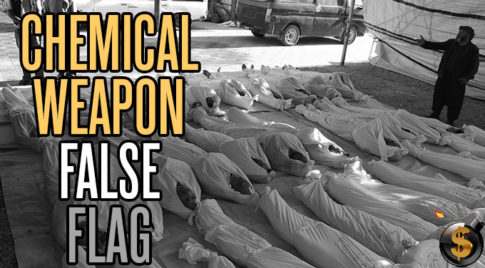 – US War Of Terror Continues On With Syrian False Flag Attack:

Everything you have been taught by the US government has been a lie.

The US is not the land of the free. It is, in fact, one of the least free places in the world with the largest concentration camp population, per capita, by a large margin and the biggest extortion racket in the world, extorting Americans via the IRS for more than $2 trillion per year.

The US is not the home of the brave. If it were, the American people would not allow the US government to constantly scare them into giving up what freedoms they have left.

The President of the US is not the “leader of the free world”. He is the misleader of a fasco-communist dictatorship and empire that is currently destroying much of the world.

But, some Americans, dumbed down after 12 years of government indoctrination camps, fluoride in the water and deluged with government propaganda in the media, actually think the US government is there to protect them!

That’s the furthest thing from the truth. The US government is there to extort and enslave them. And when it can’t get enough wars going to keep people scared into submission, it starts some more.

That happened again this week in Syria…

Despite the fact that Syrian president Bashar Al-Assad has quite a bit of popular support and is held in high regard by the Syrian people, he and his country have been under constant attack by western globalists.

Since Assad has always refused to capitulate to the will of globalists who wish to dismantle his democratically elected regime, his country has been a focus point of western mainstream media propaganda.

For a while, the mainstream television programming narrative, AKA Fake News, was that Assad was using chemical weapons on his own people. The purpose of that rhetoric was to sway popular opinion into thinking it was necessary for NATO and US troops to intervene in the country to help the oppressed Syrian public who have supposedly fallen victim to Assad’s “tyrannical” evil-dictatorship.

Of course, Assad using chemical weapons and so-called barrel bombs on his own population was entirely false and the only reason these accusations were made was because the US would much rather install their own puppet dictator via coup d’etat who will easily bend to their globalist agenda.

Talk of Chemical weapon usage had died down because ultimately it had been exposed through alternative media outlets as being an entirely false propaganda narrative.

Though now, luckily the public has really started connecting the dots. Especially because it is now more well-known that Killary Clinton and the O’bomber regime were responsible for moving Libyan sarin nerve gas into the hands of US-backed “Moderate Rebels” in Syria.

According to the infamous investigative journalist Seymour Hersh, in 2012, after the O’bomber administration took out Gaffafi and Killary cackled about his death, part of the end goal for the administration included setting up a secret agreement where funding and support would ultimately come from Turkey, Saudi Arabia, Qatar, the CIA, and MI6, to facilitate the transport of Gaddafi’s chemical weapon arsenals into Syria for false flag purposes.

And Hersh wasn’t the only guy to speak out about the truth of the situation. Journalist Christoph Lehmann released an article on October 7th, 2013 headlined, “Top US and Saudi Officials responsible for Chemical Weapons in Syria”. In the article, Lehmann mentioned that:

There are many other non-mainstream news outlets speaking the truth about the nature of the Syrian situation, but if you believe that history repeats itself then you will have no trouble believing the intention for all of this propaganda is to install a Western-backed regime in Syria.

In fact, the CIA’s first coup in Syria was actually carried out in 1949, overthrowing a democratically elected leader in an effort to enable a pipeline for Saudi oil to flow through Syria and into the largest oil market; Europe. Not surprisingly, the construction of the pipeline started the next year in 1950.

Much of this is all part of the template we’ve seen for decades with the US government destroying much of the Middle East on behalf of Israel.

General Wesley Clark has already exposed how this was all planned and put into place only 10 days after 9/11. Within days of 9/11, as if they had already had it planned, Clark was told that the US Department of Offense would attack, invade and occupy seven countries: Iraq, and then Syria, Lebanon, Libya, Somalia, Sudan and, finishing off, Iran.

To date, they have acted upon three, in addition to Afghanistan: Iraq, Libya, and Syria.

You may recall that the Iraq invasion was, according to Donald Rumsfeld, going to take “six days, maybe six weeks” but certainly less than six months.”

It has now been 14 years and the US is still occupying Iraq.

Dick Cheney, back in 1994, warned that going into Iraq would be a “quagmire” and would only serve to destabilize the entire region.

Less than a decade later, he did exactly that. But he, Rumsfeld, Bush and others all said that removing Saddam Hussein would make Iraq far better off. The opposite is true.

Then, under Barack O’Bomber, the US took out Qaddafi in Libya saying it would make Libya far better off. The opposite is true.

And now Trump, based on what almost clearly is a false flag attack done by the CIA-backed rebel forces, wants to take out Assad saying it would make Syria far better off. It won’t.

And, take a moment to think about what has happened just in the last few days.

Assad was on the verge of victory in Syria. Peace talks were set to happen shortly with him having the clear upper hand. The United States government announced the goal in Syria was no longer the removal of Assad. Everything seemed to be in his favor.

Taking this into account, why would he then turn around and use chemical weapons on his own people and turn the whole world against him?

The obvious answer is: he wouldn’t. This is the same old tricks of the evil US empire.

In the past, the US, along with Israel, tried to sink the USS Liberty in order to get support to attack Vietnam in the Gulf of Tonkin.

9/11 was a false flag attack in order to attack Afghanistan and start the War of Terror that rages on to this day.

Remember “weapons of mass destruction” in Iraq? That was supposedly the whole reason for the US invading. Turned out there weren’t any. And George W. Bush went on to laugh about it along with the mainstream media presstitutes years later.

And, as for Libya, they didn’t even really have a reason to just start carpet bombing that country except for the claim that Muammar Gaddafi was supposedly a brutal dictator – though now that he is dead, the country is in worse shape than ever. 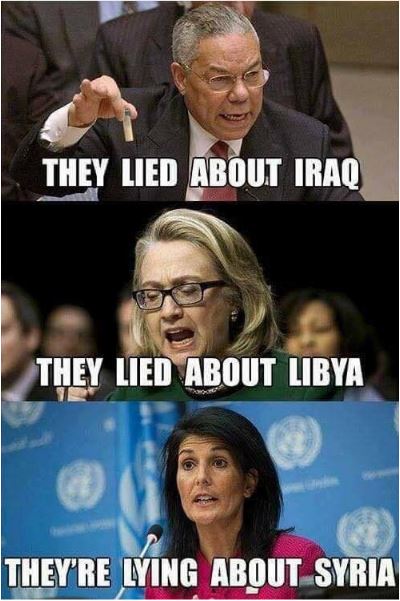 And, now they continue to try to attack, occupy, and overthrow Syria as per their plans to take over the entire region.

It’s the same old playbook and hopefully soon people stop falling for it and have people like George W. Bush, Dick Cheney, Donald Rumsfeld, Barack Obama and many others arrested and tried for crimes against humanity. And Trump too if he carries out an attack on Syria.

A big part of the globalist plan is to bankrupt the US, collapse the US dollar and then bring in a one world government and one world currency.

They are well on their way to it, too. Don’t listen to fake news like CNBC who tell you that everything is fine because the stock market is up. It’s only up because the Federal Reserve continues to print avalanches of Federal Reserve Notes which will eventually lead to hyperinflation.

You can help stop their agenda by sharing this information. Many people still get most of their information from the Fake News mainstream media.

And you can help yourself by preparing for the planned collapse. Download our free ebook, Getting Your Gold Out Of Dodge, here to learn how to prepare. And subscribe to The Dollar Vigilante newsletter (more here) for all the best info, analysis and recommendations on not only how to survive the collapse of the dollar and all other fiat currencies, but to prosper.

As we go to publish this, it appears there is talk of Trump getting ready to launch missiles at Syria. This is and would be not only unconstitutional but a war crime and crime against humanity.

Unfortunately, Donald Trump’s views on things have changed since 2013… they used to be reasonable. 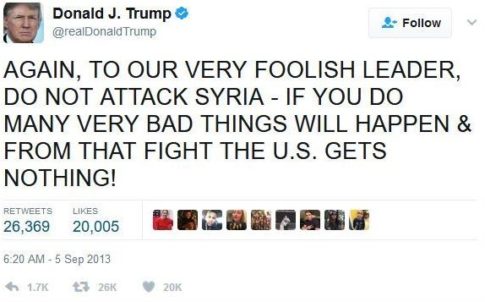