– Turkey Threatens Europeans: You “Will Not Walk Safely In The Streets” If Current Attitude Persists:

Having already told Europe “we’ll blow your mind” with a threat to unleash 15,000 immigrants per month,Turkish President Tayyip Erdogan escalated his rhetoric this morning warning Europeans across the world would not be able to walk safely on the streets if they kept up their current attitude.

Tensions have accelerated since Turkey became embroiled in a row with Germany and the Netherlands over the barring of campaign appearances by Turkish officials seeking to drum up support for an April referendum on boosting Erdogan’s powers. Today’s comments are the most aggressive yet…(via Reuters)

“If Europe continues this way, no European in any part of the world can walk safely on the streets. We, as Turkey, call on Europe to respect human rights and democracy,” Erdogan said at event for local journalists in Ankara.

As we noted previously, should Turkey execute on its threat, it is likely that the anti-immigrant, populist wave that has swept Europe in 2015 and 2016, and which has subsided modestly in the subsequent period, will find a second, and very dangerous to the European establishment, wind. 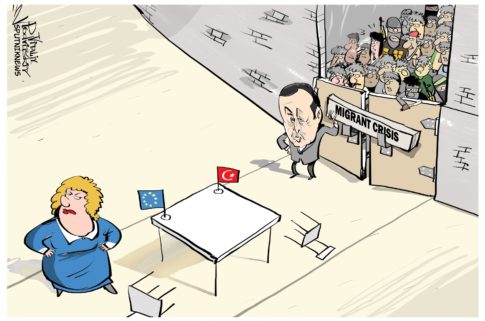 1 thought on “Turkey Threatens Europeans: You “Will Not Walk Safely In The Streets” If Current Attitude Persists – #MigrantCrisis”