– Why Is Trump Beheading The Statue Of Liberty: Spiegel Editor Explains:

Over the weekend we pointed out how the German media perceived the new US President with Der Speigel’s highly controversial cover depicting President Trump beheading the Statue of Liberty, calling on Germany “to build an alliance” against the US leader. Not exactly subtle… 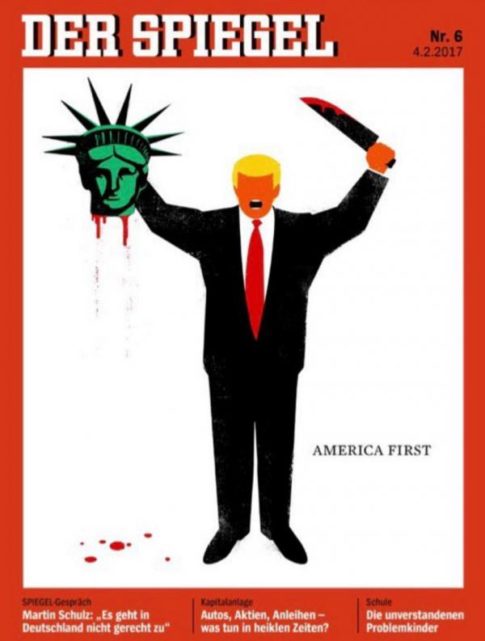 Germany’s Die Welt daily sharply criticized the cover, saying that it “damages” and “devalues journalism.” It also stressed that those who decided to depict Trump in such a way, comparing him to Islamist terrorists, had “lost all their moral guidelines.” As RT reports, the daily also accused Der Spiegel of attempts to gain “publicity at any cost” and said that the cover was an “irresponsible exaggeration” that could lead only to the loss of credibility of the German media.

In his defense of the controversial cover, Klaus Brinkbaumer, Der Spiegel editor-in-chief, told Reuters that the media outlet is actually “defending democracy” in “serious times,” and “does not want to provoke anybody.”

“On our cover the American president beheads the symbol which has welcomed migrants and refugees to the United States since 1886, and with democracy and freedom,” Brinkbaumer told the German news agency DPA, implying that the cover was a response to Trump’s executive order temporarily banning travelers and immigrants from seven predominantly Muslim countries, which was dubbed ‘the Muslim ban.’

Der Spiegel is one of Europe’s largest weekly magazines, and the cover provoked a heated discussion on social media both in Germany and abroad, and drew criticism from other German media outlets and some politicians.

Many media outlets stressed that Der Spiegel’s cover could underpin Trump supporters’ belief that the media is biased against him and “belong to the establishment, which he is allegedly up against.”

Meanwhile, populist anti-immigrant party Alternative for Germany (AfD) mocked Der Spiegel’s cover by presenting its own version of the cartoon, featuring the figure of Chancellor Angela Merkel holding a burning German constitution in one hand and a bloodstained knife with a Muslim crescent symbol on it in the other.

The picture also features Merkel’s well-known slogan, “We can make it!”

How many special snowflakes in Germany were triggered by that?