Things just got more “complicated” in US-Mexican relations, when on Thursday morning the feud between the US and Mexico deepened after president Pena Nieto said he cancelled a planned summit with Donald Trump over the US president’s insistence that Mexico pay for his proposed border wall between the two countries.

“This morning we have informed the White House that I will not go to the meeting scheduled for next Tuesday with “POTUS,” Enrique Peña Nieto tweeted in Spanish.

The fresh deterioration in diplomatic relations between the US and Mexico came after the US president tweeted earlier on Thursday that if “Mexico is unwilling to pay for the badly needed wall, then it would be better to cancel the upcoming meeting”.

“The US has a 60 billion dollar trade deficit with Mexico. It has been a one-sided deal from the beginning of Nafta with massive numbers of jobs and companies lost,” Trump added on Twitter, underlining his determination to renegotiate the North American Free Trade Agreement.

Peña Nieto had initially resisted heavy domestic pressure to cancel the meeting with Mr Trump. Mexican foreign minister Luis Videgaray told local TV station Televisa on Wednesday “for now, the meeting is still on”. Instead, Mr Videgaray had sought to take the sting out of a potentially highly damaging diplomatic dispute, highlighting some “very encouraging” signs from Mr Trump and his team and an “outstanding willingness” to work together, despite what he said had been “a day of contrasts”.

After canceling his trip, Pena Nieto added that his still wants to work with the US, and reach accords.

Vicente Fox, the former Mexican president, stoked the flames in cruder terms in a series of tweets. “Donald, don’t be self-indulgent. Mexico has spoken, we will never ever pay for the #F**kingWall,” he tweeted on Thursday morning.

And just like that NAFTA may be over. And the peso is plunging… 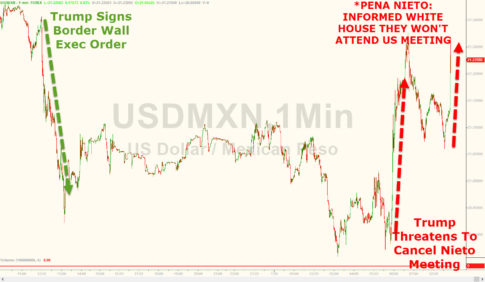 With Vicente Fox whining that Mexico “won’t pay for the f**king wall,” and Pena Nieto confirming “Mexico does not believe in walls,” President Trump just double-tweeted exactly how our southern border ‘friends’ will end up paying for the wall or else!…

The U.S. has a 60 billion dollar trade deficit with Mexico. It has been a one-sided deal from the beginning of NAFTA with massive numbers…

of jobs and companies lost. If Mexico is unwilling to pay for the badly needed wall, then it would be better to cancel the upcoming meeting.

Did Trump just give Pena Nieto an out for next week’s meeting? We suspect not as the angry tweet seems to have cornered Pena Nieto into a decision.

As a result of the Trump tweet, the Peso has tumbled erasing all the day’s gains… 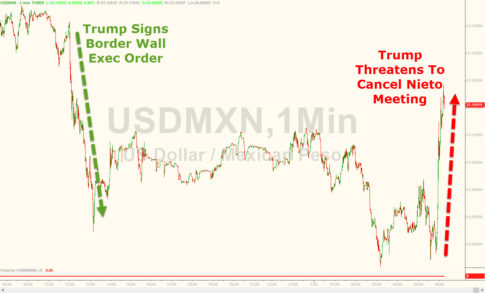 The tweet comes after Mexico’s president on Wednesday once again declared that “Mexico will not pay for any wall” but stopped short of cancelling a visit to Washington after Donald Trump signed executive orders that include building the border barrier.

Enrique Peña Nieto reiterated that Mexico would not put a single peso towards the new US president’s signature project. In a televised address he said: “I regret and reject the decision of the US to build the wall.”

“I have said time and time again, Mexico will not pay for any wall,” Peña Nieto told the nation in his short video statement on Wednesday night.

“Mexico reaffirms its friendship with the people of the United States and its willingness to reach agreements with its government.”

He left up in the air the question of the 31 January meeting with Trump in the White House – saying his decision would depend on an evaluation by a team already in Washington and officials at home.

While the costs of “building the wall” are largely unknown, estimates have been made by both political parties… 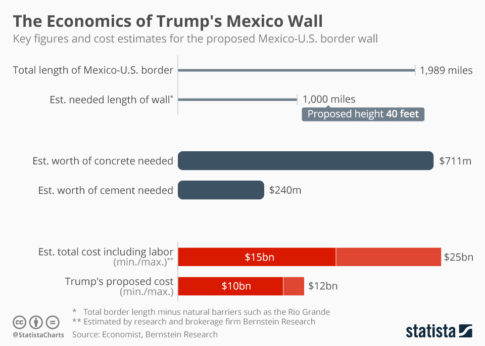 Mexico now finds itself in a double bind, squeezed not only by Trump, but also by its partner Canada, which as we reproted last night, has left Mexico on its own. Recall that Canada will focus on preserving its U.S. trade ties during talks to renegotiate NAFTA and may not be able to help Mexico avoid being targeted by the Trump administration, Canadian government sources say.

“We love our Mexican friends. But our national interests come first and the friendship comes second,” a source said on the sidelines of a cabinet retreat in Calgary, Alberta. “The two are not mutually exclusive,” the source added.

In other words, when it comes to preserving NAFTA, it’s important, but what is more important is being on good enough terms with Trump to be able to cobble together a bilateral treaty should NAFTA fail.  As Reuters reports, the comments are some of the starkest yet by Canadian officials, “who are increasingly convinced Mexico will suffer the most damage from changes to the North American Free Trade Agreement.”

Reuters’ government sources note Mexico and Canada would appear to have little in common. Trump is unhappy about the large U.S. deficit with Mexico and has promised to punish firms with manufacturing bases there. “Our negotiating positions are totally different. Mexico is being hung out of an skyscraper window by its feet,” said a second government source.”Mexico is in a terrible, terrible position. We are not,” said another Canadian person involved on the trade file.

Nieto just may have to pay for that wall after all.

Maybe that wall is being build now, so that Americans can’t flee to Mexico after the coming financial collapse.