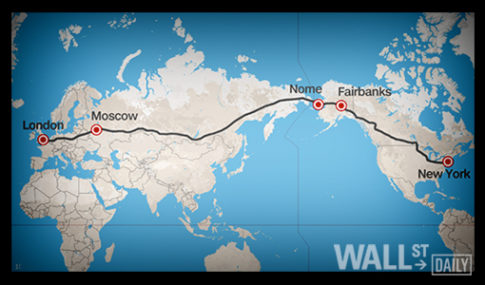 Putin’s Russia is, if nothing else, ambitious.

At a recent meeting of the Russian Academy of Sciences, the head of Russian Railways, Vladimir Yakunin, put forth a bold plan for a massive trans-Siberian highway.

This superhighway project, called the Trans-Eurasian Belt Development, includes a major roadway to be built alongside the existing Trans-Siberian Railway. And alongside that, the plans include expansive energy infrastructure involving another railway, oil and gas pipelines, as well as electricity and water supply facilities.

If this project actually comes to fruition, it would be the largest infrastructure project ever undertaken.

The Russian superhighway would link up with Europe’s existing roadway system in the west – a logical plan.

The audacious part of this scheme is the Russians’ proposal to build a connection across the Bering Sea between Russia’s Chukotka region and Alaska!

The distance between Russia’s western and eastern borders is about 6,200 miles. So just building the trans-Russian part of the road would be a monumental task. Especially when you consider the climatic conditions in Siberia.

But the Russians aren’t completely in the clouds. They admit the cost of completing this project would be trillions of dollars. In other words, it will never be built in its entirety.