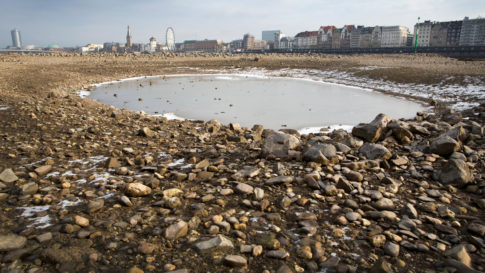 Deep circles circulate around Mitteleuropa and thus also Germany, while the only question here is whether cloudy gray fog and high fog weather or the sun is shining. In both cases significant precipitation is still present, and the prediction models confirm with every new calculation the tendency to maintain this weather situation. According to experience, the cold and therefore heavy air is also very difficult to overcome by atlantic depths. However, according to forecasts, we are far from the same as the forecast of the precipitation sum until the end of the European forecasting model ECMWF.

“An almost unprecedented low-water phase has occupied the entire catchment areas of the Rhine and Danube for months. Even if Tief ‘Egon’ has led to a slight relaxation on the Rhine and its tributaries in the short term, the levels have risen for a few days The Rhine is so low for this time of the year as it has been for at least 60 years. The comparable level was only in the years 1962 (ice winter) and summer 2003 (‘century’ with a maximum of 40.3 degrees in pearl -Nigig).

The trigger of this low water phase is a very marked precipitation deficit in the west and in the southwest of Germany as well as in Switzerland. Aggravating is now added the frost layer: this binds additional water to streams by edge formation or even icing. Since there are still no significant precipitations to be expected in the medium term, the level of absolute record values ​​in the Rhine could well be reached.