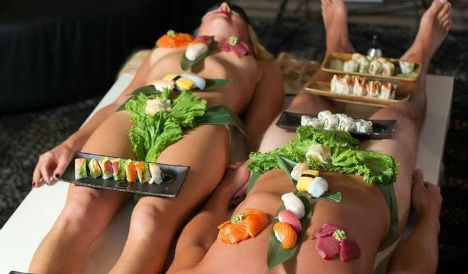 A buffet of organic food will be served on “human tables”

– Dine in the buff at Spain’s first nudist restaurant:

Spain’s first naked dining experience is opening on the island of Tenerife following the success of a similar venture in London.

Italian-born restaurateur Tony de Leonardis opens Innato, a nudist restaurant on the biggest of the Canary Islands, where diners will be asked to leave the accoutrements of modern life – namely their clothes and mobile phones – and”get back to basics”. 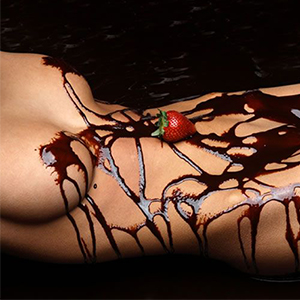 For the all-inclusive price of €70 diners will be invited to enjoy a buffet of organic dishes, all “served on the naked skin of a youth,” according to an interview with De Leonardis published in La Opinion de Tenerife.

In fact waiting staff will double up as serving tables wearing loin cloths and vine leaves to protect their modesty.

De Leonardis has even overcome the problem of where to keep your wallet to pay your meal when you are in nothing but your birthday suit.

“We will charge diners at the door before they undress,” he said.

Innato will open in the town of San Isidro on January 20th. The venue, which includes seating for 44 diners, has tables set within private gardens planted with fruit trees, and will be lit entirely by candles.

The new venture is inspired by The Bunyadi, London’s first nudist restaurant which opened for three months during the summer and saw more than 46,000 people put their name down on the waiting list for a table.

In October, the restaurant’s owner, Seb Lyall, announced plans to open a permanent location in London.