– The Following Words Had Never Appeared In An Inaugural Address, Until Today:

That Trump’s inaugural address was provocative is putting it mildly. Nowhere was this more obvious than in the initial reaction of the Financial Times. Consider the following excerpt:

For most presidents, a first inaugural address has been the occasion to set out a personal vision of the American idea. You do not necessarily lose points for failing to set out policy in granular detail. You are playing mood-music, making it as stirring as possible and positioning yourself in the grand flow of American history: reminding your audience of an essential continuity. Mr Trump’s theme was the opposite. From his first words, he stressed discontinuity: that his presidency would be a break.

That audience-shaping attempt, at least, had the right idea. Mr Trump made a lot of play with the second and first-persons plural: “This is your day”; “We will bring back our jobs.” But he positioned his “great movement” in a way that suggested not that the Washington government was the expression of democracy but its enemy. It was an unusually rancorous, backward look, given what he said about unity and solidarity. It was a dismissal of, rather than a humble doffing of the cap to, history.

[R]ewarmed like a tray of unappetising leftovers, were the familiar slogans of the campaigning Mr Trump. “The forgotten men and women of our country will be forgotten no longer.” “America will start winning again, winning like never before.” “All talk and no action.” “America first, America first.” They were greeted with what, at least on the television relays, sounded like distinctly halfhearted applause.

And here — during his sporadic attempts at the high style — were some awkwardly half-formed figures of speech. To say “we stand at the birth of a new millennium” sounds grand but, unless you have a 1,000-year regime in mind, if you can say that in 2017 you can say it any time you like. “We are one nation and their pain is our pain” would have worked if “they” had been specified. It wasn’t.

He spoke of “rusted-out factories scattered like tombstones across the landscape of our nation”; of how “a new national pride will stir ourselves (sic), lift our sights and heal our divisions”; of how “a new vision will govern”; of how “we will shine for everyone to follow”; of how “the wealth, strength and confidence of our country has dissipated over the horizon”. Each of those phrases is intended to resonate — but each, like a bell cast with a fault, makes a slight clunk.

The speech’s most memorable phrase was “American carnage”. As well as being, unfortunately, the title of a thrash metal tour a few years back, it is memorable because it sounds slightly wrong. You want an audience to associate pride, dreams, prosperity, unity, freedom, hope and suchlike with the word “American” — not “carnage”.

While we won’t comment on the FT’s visceral reaction to the speech (full transcript here) – clearly the establishment mouthpiece was not happy with the words that came out of Trump’s mouth – and while readers can make up their own mind about Trump’s address, we do want to point something out.

Like everything else about him, Trump’s speech was indeed a break from established tradition, and nowhere was this more obvious than in the selection of words that had never appeared previously in any US inaugural address.  Some of them: bleed, carnage, depletion, disrepair, flush, Islamic, ripped, sad, rusted, sprawl, stealing, stolen, subsidized, tombstones, trapped, trillions, unstoppable. 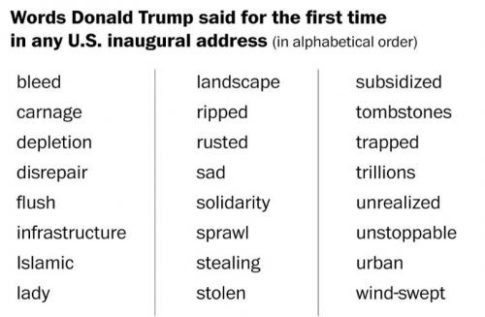 Indeed, the speech was so unorthodox it even stunned Trump advisor Carl Icahn. As he told CNBC, “Donald surprised me coming on so strongly about the establishment. I admire him for doing that.”

“I admire him for not just trying to say, ‘Wow. Let’s smooth it over. Let’s be buddies.’ I mean, he came on extremely strongly and he’s giving you a look at what the future, I think, is going to be,” Icahn added.

Icahn, Trump’s special advisor on regulatory reform, said he expects the 45th president of the United States to take a confrontational approach, to some extent. Yet he argued that may be a good thing because it will promote change.

We have yet to see if Trump will indeed follow up with his promises, or his belligerent speech. We do have one last question, however: did Trump really “borrow” a part of his address from… Bane?