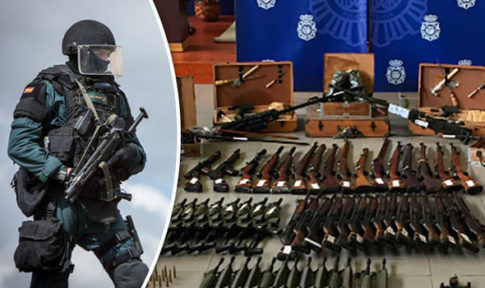 TERRORISTS in Europe are now capable of “bringing down aircraft”, Spanish police warned as they revealed the details of a huge weapons seizure this week.

Anti-terror investigators confiscated 12,000 weapons this week – just before they were sold to terrorists by a Spanish gang, who have now been arrested.Police said the weapon trafficking network was terrifying in its size and capability – which now includes anti-aircraft weaponry.

The country’s Interior Minister said “several anti-aircraft guns capable of bringing down aircraft” were seized on Thursday, along with thousands of rifles.

The entire arsenal was worth nearly £9 million. Police also seized more than £70,000 in cash.

The Interior Minister said: “Among the innumerable seized pieces are complete percussion mechanisms, recoil springs, retaining parts, guns, bolts, cylinders, frames, firing mechanisms and locking systems, all intended for the rehabilitation of weapons.“For this, they had a sophisticated and complete workshop for the repair and in its case reactivation of the firearms.”
Three of those arrested are being held in custody. Two have been released under the provision they do not leave the country. They have had their passports seized.Police said the group were made up of four men and one woman, all of whom were Spanish. They were arrested in the north Spanish towns of Olot, Liendo, Galdacano and Guecho, where the workshop was discovered.

Police forces from Barcelona, Valencia and Santander were also involved in the operation.

Police said the group was “very active” and heavily involved with selling weapons to terrorist groups.The five suspects legally bought unused weapons of war, repaired them before selling them on to terror cells or organised crime groups.