Electric, driverless shuttles with no steering wheel and no brake pedal are now operating in Las Vegas. 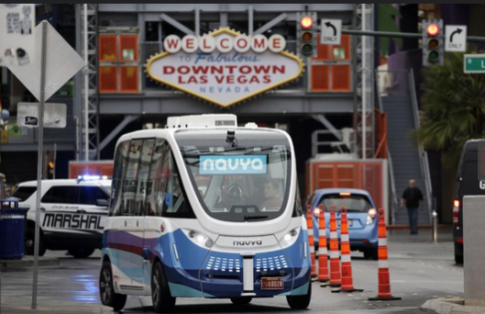 There’s a new thrill on the streets of downtown Las Vegas, where high- and low-rollers alike are climbing aboard what officials call the first driverless electric shuttle operating on a public U.S. street.

The oval-shaped shuttle began running Tuesday as part of a 10-day pilot program, carrying up to 12 passengers for free along a short stretch of the Fremont Street East entertainment district.

The vehicle has a human attendant and computer monitor, but no steering wheel and no brake pedals. Passengers push a button at a marked stop to board it.

The shuttle uses GPS, electronic curb sensors and other technology, and doesn’t require lane lines to make its way.

“The ride was smooth. It’s clean and quiet and seats comfortably,” said Mayor Carolyn Goodman, who was among the first public officials to hop a ride on the vehicle developed by the French company Navya and dubbed Arma.

“I see a huge future for it once they get the technology synchronized,” the mayor said Friday.

The top speed of the shuttle is 25 mph, but it’s running about 15 mph during the trial, Navya spokesman Martin Higgins said.

Higgins called it “100 percent autonomous on a programmed route.”

“If a person or a dog were to run in front of it, it would stop,” he said.

Higgins said it’s the company’s first test of the shuttle on a public street in the U.S. A similar shuttle began testing in December at a simulated city environment at a University of Michigan research center.

The vehicle being used in public was shown earlier at the giant CES gadget show just off the Las Vegas Strip.

He said the city hopes to deploy several autonomous shuttle vehicles — by Navya or another company — later this year for a downtown loop with stops at shopping spots, restaurants, performance venues, museums, a hospital and City Hall.

At a cost estimated at $10,000 a month, Cervantes said the vehicle could be cost-efficient compared with a single bus and driver costing perhaps $1 million a year.

The company said it has shuttles in use in France, Australia, Switzerland and other countries that have carried more than 100,000 passengers in more than a year of service.

Don’t worry taxi drivers because some of my readers say …

Those in the real world expect millions of long haul truck driving jobs will vanish by 2020-2022 and massive numbers of taxi job losses will happen simultaneously or soon thereafter.

My new timeline is not all tremendously optimistic given the rapid changes we have seen.