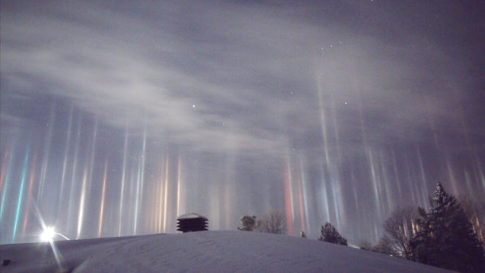 Despite appearances, aliens have not descended upon a snowy scape in Ontario, Canada. Rather, an Earthly phenomenon is the cause of a ring of brilliant shafts of pastel-colored lights, captured in the wee hours of the morning by Timmy Joe Elzinga using his smartphone camera.

It was 1:30 a.m. local time in northern Ontario on Jan. 6 when Elzinga spotted the phenomenon.

“When I first saw these light beams shooting through the sky from my bathroom window, I was sure they were the northern lights,” Elzinga told Live Science in an email. “I was able to capture these images both because the lights were so bright and pronounced and because I’m a bit of an amateur photographer.” That experience, he said, led him to use “the manual settings on my phone to adjust the time the aperture was open to 8 seconds.”

Elzinga said he wasn’t aware of this light-pillar phenomenon until he saw it firsthand.