– Identity Of “Former Intelligence Officer” Who Prepared The Trump Dossier, Has Been Revealed:

While we learned earlier that John McCain was responsible for handing over the 35-page “dossier” of compromising, if arguably fake, revelations about Trump’s connections to Russia over to the FBI, the identity of the actual creator, who was said to be an ex-British intelligence service, remained a mystery.

The real Chris Steele is profiled below, courtesy of LinkedIn. 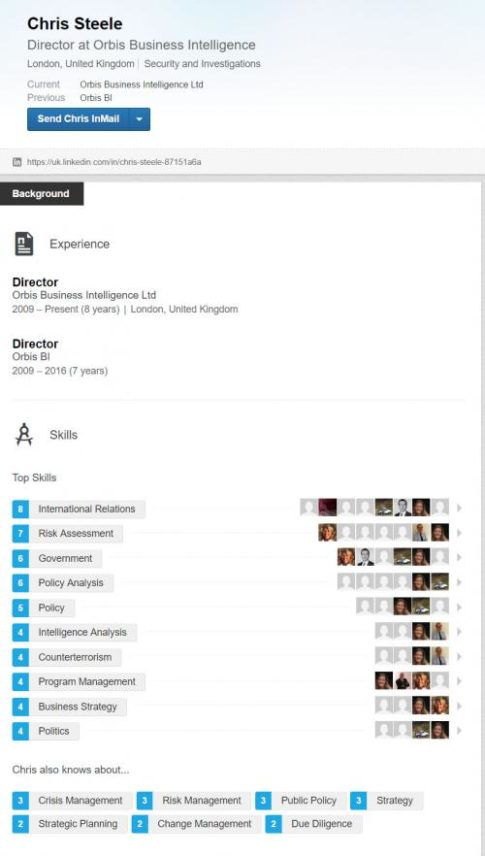 Steele, 52 years old, is one of two directors of Orbis, along with Christopher Burrows, 58.

Burrows, reached at his home outside London on Wednesday, said he wouldn’t “confirm or deny” that Orbis had produced the report. A neighbor of Mr. Steele’s said Mr. Steele said he would be away for a few days. In previous weeks Mr. Steele has declined repeated requests for interviews through an intermediary, who said the subject was “too hot.”

According to Steele’s LinkedIn profile, at least before he scrubbed it, he was a counselor in the Foreign and Commonwealth Office, with foreign postings in Brussels and New Delhi in the 2000s. The Foreign Office declined to comment to the WSJ. Furthermore, the LinkedIn profile for Mr. Steele doesn’t give specifics about his career, however notes that intelligence officers often use diplomatic postings as cover for their espionage activities. That, or they are dumb enough to actually reveal where they are stationed.

Some more details courtesy of the WSJ:

Orbis Business Intelligence was formed in 2009 by former British intelligence professionals, it says on its website. U.K. corporate records say Orbis is owned by another company that in turn is jointly owned by Messrs. Steele and Burrows. It occupies offices in an ornate building overlooking Grosvenor Gardens in London’s high-end Belgravia neighborhood.

The dossier consists of a series of unsigned memos that appear to have been written between June and December 2016. Beyond creating the document, Mr. Steele also came up with a plan to get the information to law-enforcement officials in the U.S. and Europe, including the F.B.I., according to a person familiar with the matter.

The WSJ adds that “the author of the report had a good reputation in the intelligence world and was stationed in Russia for years, said John Sipher, who retired in 2014 after 28 years in the CIA’s clandestine service, where he specialized in Russia and counterintelligence.”

Private-intelligence firms like Orbis have a growing presence. Major corporations use them to conduct due diligence on potential business partners in risky areas, but quality control can be loose when it comes to high-level political intrigue, according to executives of private intelligence companies. It appears they are also used to create smear campaigns (for lots of money one assumes) targeting potential presidential candidates, not to mention president-elects.

As for the fundamental question, are the memos in the Trump dossier real, here is the answer:

Andrew Wordsworth, co-founder of London-based investigations firm Raedas, who often works on Russian issues, said the memos in the Trump dossier were “not convincing at all.”“It’s just way too good,” he said. “If the head of the CIA were to declare he got information of this quality, you wouldn’t believe it.” Mr. Wordsworth said it wouldn’t make sense for Russian intelligence officials to expose state secrets to an ex- former MI-6 officer. “Russians believe once you are an agent, you’re an agent forever,” he said.

Yes, a rational person wouldn’t believe it, but BuzzFeed and other fake news outlets certainly would.

19 thoughts on “Identity Of “Former Intelligence Officer” Who Prepared The Trump Dossier, Has Been Revealed”