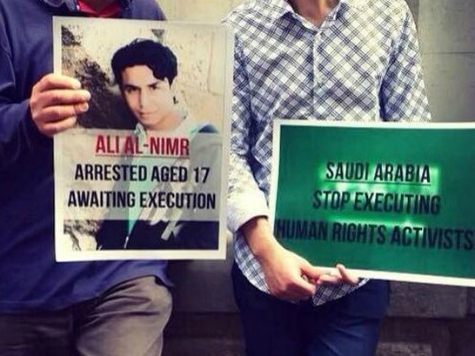 Ali Mohammed al-Nimr faces death by crucifixion in Saudi Arabia after a court dismissed his final appeal. Human rights groups are condemning the punishment, especially since he was only 17 when authorities arrested him in 2012 on charges of participating “in illegal protests and of firearm offenses.”

International Business Times reports that authorities denied him “access to lawyers.” Other evidence shows “he was tortured and forced to sign a document which was tantamount to a confession.” That confession is the only evidence the court used to convict al-Nimr.

“No one should have to go through the ordeal Ali has suffered – torture, forced ‘confession,’ and an unfair, secret trial process, resulting in a sentence of death by ‘crucifixion,’” exclaimed Maya Foa, the director of the death penalty team at Reprieve. “But worse still, Ali was a vulnerable child when he was arrested and this ordeal began. His execution – based apparently on the authorities’ dislike for his uncle, and his involvement in anti-government protests – would violate international law and the most basic standards of decency. It must be stopped.”

However, human rights groups believe the case against him cuts much deeper:

The case against Ali appears to be based on his familial connection to Sheikh Nimr al-Nimr, a 53-year old critic of the Saudi regime and a prominent religious leader in the Kingdom, who is his uncle. Mr Al Nimr was sentenced to death by crucifixion on charges including “insulting the King” and delivering religious sermons that “disrupt national unity”. This week, it emerged that the authorities plan to execute Ali’s uncle on Thursday (17 September) sparking fears that his nephew will also be killed.

“These accusations are untrue and Saudi officials are deliberately issuing this sentence following the sentence of Sheikh Nimr al-Nimr,” declared his father. “My son has never had a lawyer during his trial and interrogation and this sentence against him was a predefined process.”

Amnesty International found that Saudi Arabia executes at least two people every other day. As of August 25, 102 people died at the hands of executioners, which puts the total at 174 for the past 12 months. The government faced massive backlash when a video emerged in January of a brutal public beheading of a woman in Mecca. Their overuse of capital punishment drew comparisons to the Islamic State (ISIS/ISIL). Interior Ministry spokesman Major General Mansour al-Turki told NBC News the punishments are not similar, since the Islamic State “has no legitimate way to decide to kill people.”

“When we do it in Saudi Arabia, we do it as a decision made by a court,” he explained. “The killing is a decision, I mean it is not based on arbitrary choices, to kill this and not to kill this. When you kill somebody without legitimate basis, without justice system, without court, that is still a crime whether you behead them or kill [them] with a gun.”