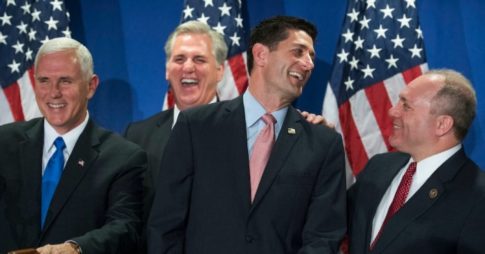 Republicans in the U.S. House of Representatives didn’t even wait for the new congressional session to begin before betraying President-elect Donald Trump’s key promise “to drain the swamp” of political corruption.

On Monday evening, in a closed-door party meeting, GOP lawmakers in the House voted overwhelmingly (119 to 74) to neutralize and reconfigure the Office of Congressional Ethics by stripping its independent authority and making it subservient to the very members of congress it was designed to oversee.

Though Trump himself has already showed (repeatedly) how the “drain the swamp” mantra was nothing more than empty campaign rhetoric, the Republican Party’s decision to ditch independent oversight of themselves looked to many like an ominous way to kick off the New Year or the 115th Congress, whose members will be sworn in Tuesday.

The vote was an approval of an amendment put forth by Rep. Bob Goodlatte (R-Va.), who chairs the House Judiciary Committee. If finalized, as the Huffington Post explains, the change would:

place the OCE under the “oversight” of the lenient Ethics Committee and rename it the Office of Congressional Complaint Review. The new group would no longer be able to release information to the public, employ anyone “for a position involving communications with the public,” or directly contact law enforcement without approval. It would also be prohibited from investigating anonymous complaints.

Outrage among Democrats and outside ethics advocates was immediate.

“Republicans claim they want to ‘drain the swamp,’ but the night before the new Congress gets sworn in, the House GOP has eliminated the only independent ethics oversight of their actions,” Democratic Minority Leader Nancy Pelosi of California said in a statement after word of the vote broke Monday night. “Evidently, ethics are the first casualty of the new Republican Congress.”

The new rule she said would essential “destroy” critical oversight over potential conflicts of interest or abuse by lawmakers.

Norman Eisen and Richard Painter, chair and vice chair of the non-partisan Citizens for Responsibility and Ethics in Washington (CREW), agreed.

“Undermining the independence of the House’s Office of Congressional Ethics would create a serious risk to members of Congress, who rely on OCE for fair, nonpartisan investigations, and to the American people, who expect their representatives to meet their legal and ethical obligations,” Eisen and Painter said in a joint statement.

Created in the aftermath of high-profile corruption scandals and ethics question during the George W. Bush era, the OCE was specifically established as an independent panel that could conduct discrete investigations of congressional members without the shadow of political influence.

“With [this] action  —  taken behind closed doors and with no opportunity for public debate ,” Schuman told the HuffPo, “ the House now rolls back the clock to an era of corruption and decay. We will all be the worse for it.”

Eisen and Painter said the OCE was “one of the outstanding ethics accomplishments” of the House because it prevented ethical questions or possible infraction from being swept under the rug. “If the 115th Congress begins with rules amendments undermining OCE,” they warned, “it is setting itself up to be dogged by scandals and ethics issues for years and is returning the House to dark days when ethics violations were rampant and far too often tolerated.”