Edward Jay Epstein has an op-ed in the Wall Street journal promoting his new book “How America Lost Its Secrets: Edward Snowden, the Man and the Theft”.

At the forefront of Epstein’s claims is the fact that Snowden lied. “As he seeks a pardon, the NSA thief has told multiple lies about what he stole and his dealings with Russian intelligence,” says Epstein. 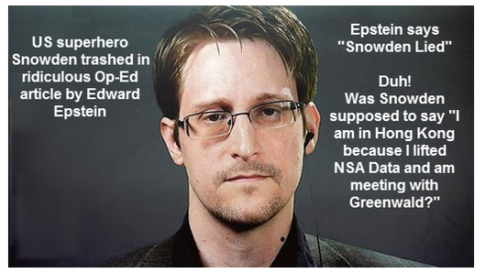 Of all the lies that Edward Snowden has told since his massive theft of secrets from the National Security Agency and his journey to Russia via Hong Kong in 2013, none is more provocative than the claim that he never intended to engage in espionage, and was only a “whistleblower” seeking to expose the overreach of NSA’s information gathering. With the clock ticking on Mr. Snowden’s chance of a pardon, now is a good time to review what we have learned about his real mission.

Mr. Snowden’s theft of America’s most closely guarded communication secrets occurred in May 2013, according to the criminal complaint filed against him by federal prosecutors the following month. At the time Mr. Snowden was a 29-year-old technologist working as an analyst-in-training for the consulting firm of Booz Allen Hamilton at the regional base of the National Security Agency (NSA) in Oahu, Hawaii. On May 20, only some six weeks after his job there began, he failed to show up for work, emailing his supervisor that he was at the hospital being tested for epilepsy.

This excuse was untrue. Mr. Snowden was not even in Hawaii. He was in Hong Kong. He had flown there with a cache of secret data that he had stolen from the NSA.

Well la-de-friggin da. The idiocy of those opening paragraphs is obvious to the world.

What was Snowden supposed to say? “Hey guys I am not coming into work because I stole documents and I am meeting up with Greenwald?”

So of course Snowden lied… he had to lie.

It was not the quantity of Mr. Snowden’s theft but the quality that was most telling. Mr. Snowden’s theft put documents at risk that could reveal the NSA’s Level 3 tool kit—a reference to documents containing the NSA’s most-important sources and methods. Since the agency was created in 1952, Russia and other adversary nations had been trying to penetrate its Level-3 secrets without great success.

Yet it was precisely these secrets that Mr. Snowden changed jobs to steal. In an interview in Hong Kong’s South China Morning Post on June 15, 2013, he said he sought to work on a Booz Allen contract at the CIA, even at a cut in pay, because it gave him access to secret lists of computers that the NSA was tapping into around the world.

Snowden figured out the NSA was involved in illegal activity and he wanted to investigate the depth of it. He succeeded. Congratulations to Snowden for a job well done.

In October 2014, he told the editor of the Nation, “I’m in exile. My government revoked my passport intentionally to leave me exiled” and “chose to keep me in Russia.” According to Mr. Snowden, the U.S. government accomplished this entrapment by suspending his passport while he was in midair after he departed Hong Kong on June 23, thus forcing him into the hands of President Vladimir Putin’s regime.

None of this is true. The State Department invalidated Mr. Snowden’s passport while he was still in Hong Kong, not after he left for Moscow on June 23. The “Consul General-Hong Kong confirmed that Hong Kong authorities were notified that Mr. Snowden’s passport was revoked June 22,” according to the State Department’s senior watch officer, as reported by ABC news on June 23, 2013.

Mercy! His passport was invalidated on June 22, not June 23. Call out the national guard. It’s treason I say.

To provide a smokescreen for Mr. Snowden’s escape from Hong Kong, WikiLeaks (an organization that the Obama administration asserted to be a tool of Russian intelligence after the hacking of Democratic Party leaders’ email in 2016) booked a dozen or more diversionary flight reservations to other destinations for Mr. Snowden.

Oh yes, let’s drag Obama’s stupidity into the discussion. The only thing Epstein failed to deliver was nonsense from the Washington Post. Perhaps it’s in the book.

Nowhere did Epstein make the case Snowden was anything more than a whistle-blower.

His op-ed is so ridiculous, one can dismiss the book as the work of a misguided fool who fails to understand what the US constitution is all about.

@ggreenwald@snowden Edward Snowden is a genuine US hero. It’s fake-patriot, book-writing fools like Epstein the US really has to fear.